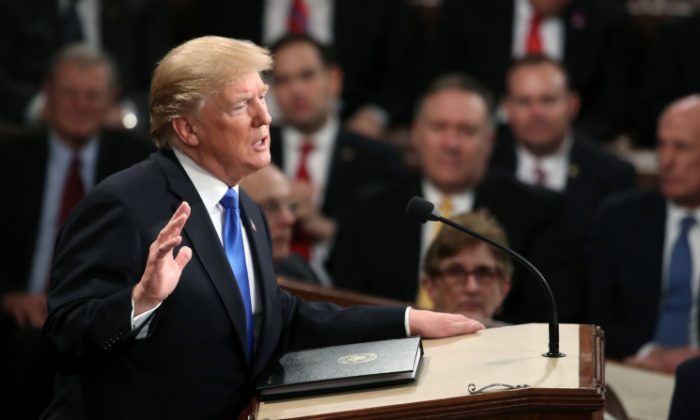 Three in four Americans who viewed President Donald Trump’s first State of the Union speech last night approved of the address, according to a CBS poll.

The president received top marks across the board for the content of the speech, which included proposals for comprehensive immigration reform, a $1.5 trillion infrastructure investment, lowering prescription drug costs, and battling the opioid epidemic, among others.

The vast majority of the viewers approved of Trump’s plans, with 91 percent favoring his infrastructure proposal, 75 percent approving of the ideas for handling national security, and 72 percent favoring the immigration reform plan.

Trump supporters made up roughly half of the audience surveyed, with 32 percent identifying as a Trump opponent and 32 describing themselves as “something in between.”

The president listed his accomplishments during the first year, including a booming stock market, historic low unemployment numbers, the passage of the tax cut bill, and a near-total recapture of land formerly held by the ISIS terrorist group.

Two out of three viewers said that the speech made them feel proud, while roughly one in three said they felt safer after hearing Trump speak. Eighty-four percent gave the president at least some credit for the booming economy.

Among the proposals, Trump spent the most time detailing his “four pillars” plan for immigration reform. The president offered a 12-year path to citizenship for 1.8 million people who were brought to the country illegally as children. In exchange, Trump’s plan demands to fund the southern border wall, end the visa lottery program in favor of a merit-based system, and limit chain migration by allowing only spouses and minor children of citizens to apply for naturalization.

“It is time to reform these outdated immigration rules, and finally bring our immigration system into the 21st century,” Trump said. “These four pillars represent a down-the-middle compromise and one that will create a safe, modern, and lawful immigration system.”

The CBS poll surveyed 1,178 State of the Union watchers and has a 3.1 percent margin of error.