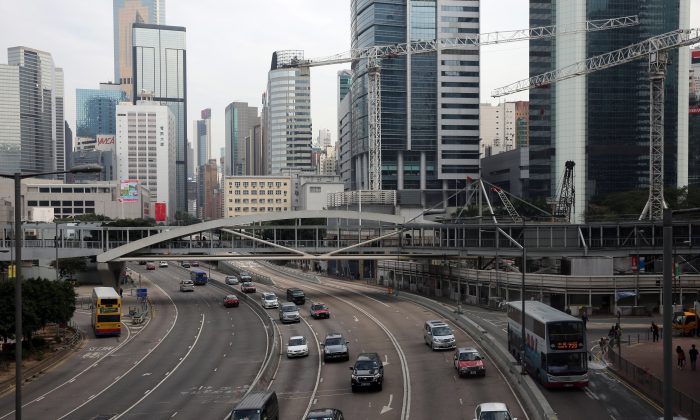 HONG KONG—Traffic was back to normal Friday in Hong Kong’s financial district after authorities demolished a protest camp at the heart of the city’s two-and-a-half month pro-democracy movement.

Hundreds of police officers, some armed with chain saws and bolt cutters, on Thursday methodically dismantled barricades, tore down canopies and removed banners in a daylong operation to shut the protest site sprawled across a normally busy highway.

Police said 249 people were arrested for unlawful assembly and obstructing police officers, bringing the total number of those detained since the movement began 75 days earlier to about 900.

There were no violent clashes seen in previous confrontations. The student-led protesters had occupied streets in the Admiralty neighborhood and two other areas since Sept. 28 to protest Beijing’s restrictions on the first election of the city’s top leader.

“It’s now convenient for everybody, but I also feel very unfortunate that we can’t argue with the government,” said Ngai Tsui-kuen, a courier.

The unprecedented campaign, which began as separate protests led by student and activist groups, got a jumpstart in September when police fired dozens of tear gas rounds on a group of demonstrators angered over the prolonged detention of key student leaders. The resulting movement paralyzed traffic, polarized public opinion and, activists said, marked the start of an era of civil disobedience in Hong Kong, an orderly Asian financial hub where residents are increasingly worried about mainland China’s increasing sway.

It also adds to the challenges for Chinese leader Xi Jinping, who has taken a tough stance against dissent in other regions at the country’s edges.

On Thursday, hundreds of demonstrators heeded police warnings to leave the protest zone to avoid being arrested, but dozens remained on the street. They chanted “I want true democracy” and “We will be back” but offered no resistance as they were taken away one by one, many lifted off the ground.

“I feel very sad because it seems that the whole occupy movement is over,” said Mo Lau, a student. “But I believe that we will see more actions as our demand has not been addressed. In the short term, I think there will be a lot of demonstrations or protests.”

The sprawling Admiralty encampment, next to city government headquarters, was the focal point of what became known as the “Umbrella Movement” because of the protesters’ use of umbrellas to fend off police pepper spray.

The protesters reject Beijing’s restrictions on the election of the city’s top leader scheduled for 2017, but failed to win any concessions from Hong Kong’s government.

“People will come back again, they will come back with stronger force,” said Alex Chow, secretary general of the Hong Kong Federation of Students, who was arrested.

Pro-democracy lawmakers said they would pressure the government in the legislature by blocking funding requests and the government’s electoral reforms.

“A dialogue can only happen when we vote down the coming political reform package,” said pro-democracy lawmaker Lee Cheuk-yan, who was the last to be taken away by police.