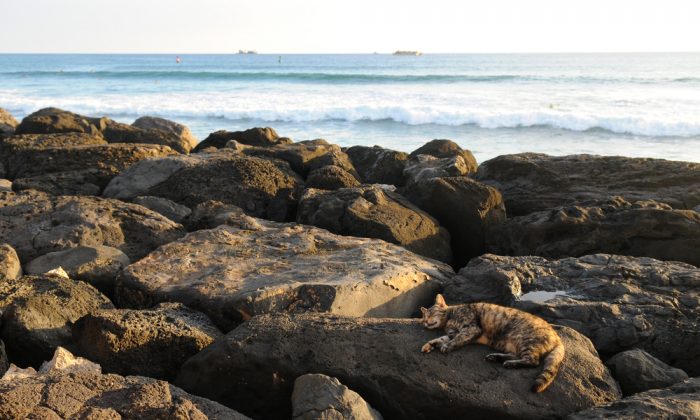 Cat sunning on rocks by the ocean in Oahu, Hawaii. (*Shutterstock)
12- OBSOLETE

Bich Ngoc, who earns less than $60 a week and has a newborn son, cobbled together four months of savings to buy the latest iPhone so she could impress her colleagues who have older versions of the device. … (Read more)

To spread the word of peace among younger generations, Sen Genshitsu recalls his days in the kamikaze suicide corps, a time filled with the fear of death when friends could disappear forever.

But he said he wonders if young people actually understand the words and message he relays in his postwar lectures. World War II ended before Sen could be sent on a suicide mission, and he went on to become head master of a famed tea ceremony school. … (Read more)

Traders and market analysts have noted that seasonal sales are starting earlier and earlier in Poland, but the cuts still fail to generate the interest shown in countries such as the UK. … (Read more)
The News

Overall, the Sentosa attraction came in eighth in the world in this year’s TripAdvisor Travellers’ Choice awards. … (Read more)

A Swiss man who is touring Europe on a tractor has arrived in Iceland for the next leg of his journey.

Retired theatre technician Reiner Huttasch is fulfilling a lifelong dream by travelling around the continent on his 54-year-old Buhler tractor. He arrived at the North Atlantic island’s port of Seyðisfjörður after taking the ferry from Denmark, and now intends to circumnavigate the country’s picturesque coastal road. … (Read more)

Hawaii: Thank you for not feeding the feral cats

If you really want to help the feral cats, don’t feed them.

I live in a community complex that, for years, has always had a few feral cats hanging out in the surrounding bushes. I couldn’t help but admire these mysterious survivors — they were sleek, smart, totally independent and perfectly self-maintaining. And as a result of their presence and natural skills, we had no pesky rodents, but still plenty of birds.

Things seemed balanced, natural and right. But then, about two years ago, a few tenants started to feed these feral cats on a regular basis. … (Read more)
The Garden Island

Fruit lovers are in for a shock after it was revealed over 80 percent of Norwegian berries contain pesticides, says a report.

The latest report from the Food Standards Agency (FSA) and Bioforsk shows that 84 percent of fruits and berries in Norwegian stores contain pesticide residues. Last year’s report found a figure of 74 percent, which means a 13 percent increase in one year. … (Read more)

*Image of cat sunning on rocks by the ocean in Oahu, Hawaii via Shutterstock