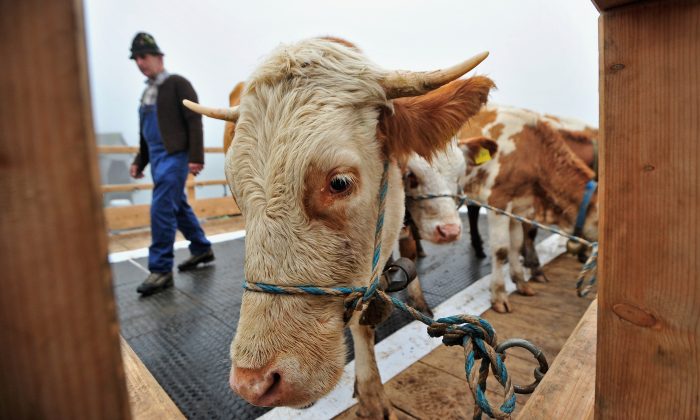 Cows stand on a boat that carries them across Koenigssee Lake during the traditional cattle drive near Schoenau am Koenigssee, Germany, on Oct. 5, 2013. (Lennart Preiss/Getty Images)
12- OBSOLETE

HAMBURG—It’s good to have a clear conscience about breakfast, so when the yogurt container or milk bottle pictures happy animals, it’s reassuring. Consumers frequently imagine happy cows in lush pastures and roomy stalls where everything is good. But that’s only part of the truth.

To meet organic and animal rights standards, farmers are required to have experts verify that they meet certain standards, but they don’t include a measure of the animal’s happiness. “The examiners only look at the stalls, not the stall residents,” explains Jan Brinkmann, from the Thünen Institute for Organic Agriculture.

And that’s precisely what Brinkmann and his colleagues would like to change. They are working with consumer economic researchers at the Thünen Institute to create new animal welfare criteria for milk production. “The organic associations in Germany have a major interest in it,” says Angela Bergschmidt, one of these experts. …

OTTAWA—Defence researchers spent almost $14,000 on a survey that asked whether superheroes can leap over skyscrapers.

The study for the research arm of National Defence also asked 150 people online whether superheroes can fly through the air; see through walls; hear whispers from miles away; become invisible; and walk through walls.

The oddball questions were part of a short study completed in October to help the Canadian Forces “win the hearts and minds” of the local populations it faces when deployed overseas, such as recently in Afghanistan. …

Estonia: And This Year’s Most Popular Baby Names Are …

Rasmus, Martin and Robin for the crew in blue and Maria, Sofia and Laura for the girls.

Rasmus, Grigor and Mia were major gainers while Kevin, Kristjan and Kristina declined significantly in popularity compared with 2012.

In Russian-speaking communities, Artyom and Nikita were the leading boys’ names. Maria, the top girls’ name nationwide, was a crossover favorite, popular among both ethnic Russians and quite a few Estonians. …

After 10 years fading into disrepair and obscurity, the once beloved Mundo Mágico is making a comeback as the setting for a graphic novel and film.

It was once a wonderful fixture in the childhood of every Santiaguino — now a group of young filmmakers is hoping to turn the abandoned amusement park into every kid in Santiago’s nightmare. …

The abandoned park has fallen into disrepair: its gates are boarded up, weeds grow through the slates of the mini-train track and slime grows over what were once ponds. …

During scorching summer weather there is no better place to be than underground – especially if you are a pregnant microbat.

Each summer tens of thousands of female eastern bentwing bats migrate to limestone caves in southern New South Wales to deliver and rear their pups. …

“They only give birth to one young a year and the mortality rate is quite high,” said Doug Mills of the NSW National Parks and Wildlife Service.
“The fact that there are only three maternity sites is a really significant conservation issue.” …

Wales: Maria Leijerstam becomes the first person to cycle to the South Pole in just 10 days

A Welsh adventurer has achieved a world first after overcoming ‘vicious’ conditions to become the first person to cycle to the South Pole in just 10 days.

Maria Leijerstam, from the Vale of Glamorgan, completed the ride – from the edge of the continent – this morning following a gruelling 500 mile ride.
The 35-year-old set off from the Novo Russian air force base on December 16 and went head to head against two other riders – American Daniel Burton and Spaniard Juan Menendez Granados.

It was so cold that at one point even the sweat on the inside of her boots froze.

Illegally-mined gold represents about 20 percent of Peru’s overall exports of the precious metal, according to tax agency Sunat.

Illegal gold mining has taken off over the past decade in the Madre de Dios basin and has been the source of mercury pollution in indigenous communities, whose fish are now contaminated, and has caused deforestation of thousands of hectares of the Amazon rainforest.