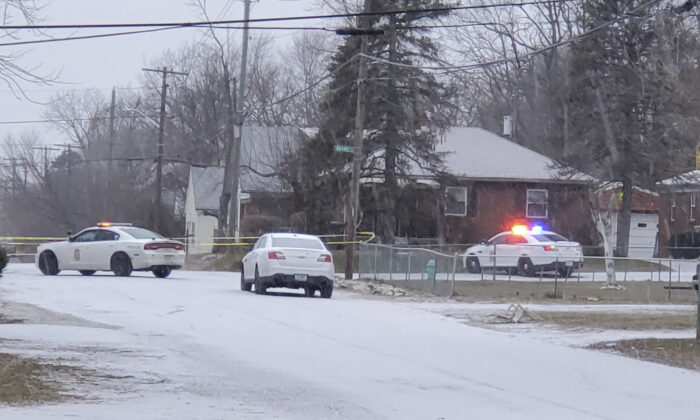 Indianapolis Metropolitan Police Department work the scene Sunday, Jan. 24, 2021 in Indianapolis where five people, including a pregnant woman, were shot to death early Sunday inside an Indianapolis home. Th pregnant woman who was taken to an area hospital, both she and the unborn child died despite life-saving efforts. (Justin L. Mack,The Indianapolis Star via AP)
Crime and Incidents

6 Dead in Indianapolis Mass Shooting, Including Pregnant Woman and Her Unborn Child

Six people were killed in a mass shooting incident in Indianapolis over the weekend, including a pregnant woman and her unborn child, officials confirmed, describing the crime as a “different kind of evil.”

The Indianapolis Metropolitan Police Department (IMPD) responded to an emergency call at about 4 a.m. on Sunday about a juvenile male who had been shot in the city’s northeast side. Police located the juvenile with apparent gunshot wounds, IMPD Sgt. Shane Foley told reporters at a press briefing.

The coroner’s office has identified the victims as three teenagers aged between 13 and 19, two adults in their 40s, and an unborn child, The Associated Press reported.

The unborn child and her mother, identified as 19-year-old Kiara Hawkins, were taken to a local hospital but later died.

“Despite the best life-saving efforts provided by medical staff, both the female and the unborn child did not survive,” Foley said. “The juvenile male that was shot is expected to survive his injuries.”

The other victims were pronounced dead at the scene, in what has been described by authorities as the largest mass-casualty shooting in the city in more than a decade.

“What we saw this morning was a different kind of evil. What occurred this morning, based on the evidence that’s been gathered so far, was mass murder,” IMPD Police Chief Randal Taylor said at the briefing.

Taylor said investigators believe the shooting wasn’t a random act, but a targeted attack carried out by an assailant or assailants, adding that there seems to be no threat to the community.

The department has opened an investigation into the mass shooting. No suspects or persons of interest have been identified or taken into custody as of Sunday, police said.

The mayor of Indianapolis also addressed the shooting during Sunday’s briefing, saying those involved will be held fully accountable, and adding that “the full might of local, state, and federal law enforcement are coming for them as I speak.”

Hogsett has since contacted the United States Attorney’s Office for the Southern District of Indiana and the Indianapolis Field Office of the FBI for assistance in the investigation.