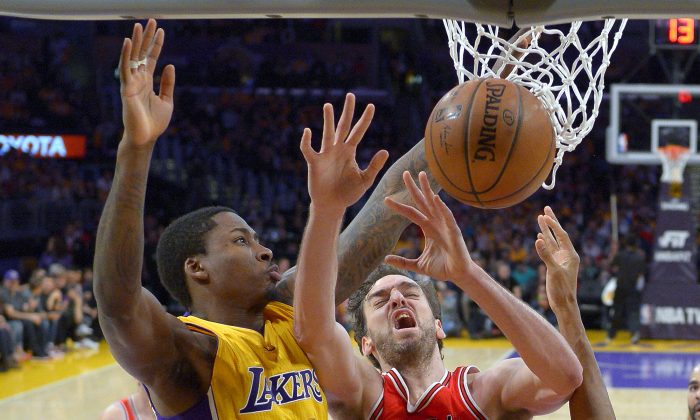 The NBA trade deadline is coming up soon–it’s on Thursday afternoon–and the buzz has been building up.

Contenders are looking to bolster their rosters while teams without a chance of making the playoffs are more and more willing to get rid of players for future assets and/or young potential.

Teams are looking for a variety of players, but some definitely need a big man or two to prepare for the next round.

Check out six big men available at the deadline below.

The Lakers big man has proclaimed that he will not opt in on his $2 million player option in the offseason, making him an unrestricted free agent.

And for good reason. Los Angeles hasn’t had many bright spots, but Davis has been one of them. The 25-year-old has had one of his better seasons in the league, averaging 8 points and 7.3 rebounds a game, and shooting 58 percent from the floor, in 24 minutes a game.

Davis has notably brought more energy than other big men on the team, and could easily get dealt before the deadline hits. The Lakers likely don’t want to spend a lot of money on players like Davis in the offseason, preferring to target better players. But Davis could be a nice backup power forward for a number of teams, such as the Los Angeles Clippers.

The Lakers could offload Hill as well, and teams may want him more due to his more attractive contract.

Hill has a $9 million team option for next season. While Davis could leave a team that acquires him, teams can give Hill a sort of try out for the rest of the season. If they like what they see, they can keep him for a fair price.

Hill has more of a finesse game compared to Davis. He shoots a lot of mid-range jumpers, but can’t extend to 3-point range. He’s averaging 12.3 points and 8 rebounds on 47 percent shooting in 28 minutes a game.

The Utah Jazz are another team that has to make decisions about existing players, or risk letting them walk.

The Turkish big man told the Salt Lake Tribune that he wants to be dealt because he’s frustrated by his role, which has been decreased with Rudy Gobert’s emergence. Kanter is averaging 13.8 points and 7.8 rebounds on 49 percent shooting in about 27 minutes a game.

League executives say that Utah wants a first-round pick or a good young player for the 22-year-old, who will be a restricted free agent after this season, reported Yahoo. Several teams, none of which have been named, are pursuing Kanter.

The Nets have not so subtly been shopping Lopez, Joe Johnson, and Deron Williams for a while, but haven’t dealt any of them yet. The trio was supposed to lead Brooklyn to at least a deep playoff run or two by now, but have failed. Lopez has been sidelined by multiple injuries, including for all but 17 games last season.

The 26-year-old is a risk but has still been sought by multiple teams, including the Nuggets and Thunder. The other part of the risk is his contract–Lopez has a $16.7 million player option for next season. Many believe he’ll opt in considering his injury problems, but if he’s sent to a team he doesn’t like he could opt out.

Lopez is averaging 15.3 points and 6.2 rebounds on 50 percent shooting in 27.1 minutes a game, including his recent off-the-bench role.

Denver has a lot of money on the books and wants to get rid of some of it. McGee, who is set to make $12 million in the final season of his contract next year, is a prime target.

The Nuggets have a host of players attractive to other teams–including Wilson Chandler, Arron Afflalo, and Ty Lawson–and could easily package one or two of these players with McGee to offload his contract. The team might also resort to adding a draft pick or two, even if it’s a second-rounder, to help the trade partner swallow the deal.

The 27-year-old had been a big disappointment, and has only appeared in 17 games so far this season after missing all but five the season prior. He’s averaging 5.2 points and 2.8 rebounds in 11.5 minutes a game, and shooting 55 percent, in the games he has managed to appear in.

The Suns and Plumlee’s agent were reportedly searching for a trade partner earlier this season, but may have backed off that search as the 26-year-old has re-emerged in Phoenix’s rotation.

The Suns acquired Brandan Wright but Alex Len soon got injured, pushing Plumlee back into a starting position. Couple that with the idea that Phoenix is seeking a first-round pick for Plumlee, and it may be unlikely that he gets dealt.

Plumlee, in just his third season, is averaging 4.3 points and 5.1 rebounds on 54 percent shooting in 18.6 minutes a game.