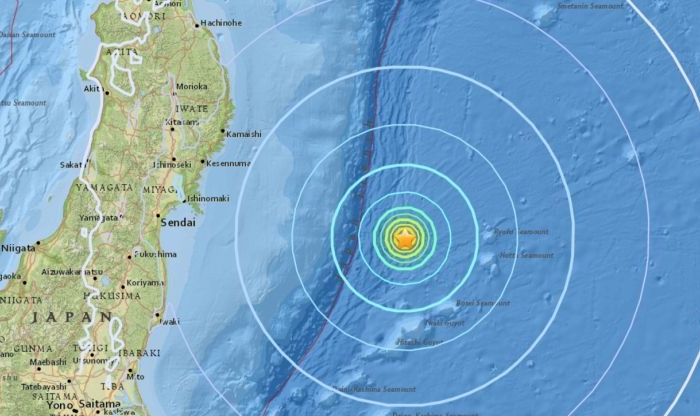 Magnitude-6.1 Earthquake Hits Off the Coast of Japan, 200 Miles From Fukushima

A strong, magnitude-6.1 earthquake struck off the coast of Japan, according to the U.S. Geological Survey in an update on Wednesday.

The quake hit about 175 miles from Kamaishi and 200 miles from Fukushima Prefecture.

The extent of the damage isn’t clear.

It’s also not clear if a tsunami warning was issued.

During the massive March 2011 earthquake, which killed at least 10,000 people, Fukushima Prefecture was heavily impacted. It houses the crippled Fukushima Daiichi Nuclear Power Plant, which was the site of the most severe nuclear accident since the 1986 Chernobyl disaster in the former Soviet Union. In 2017, TEPCO released photos that were taken inside the plant’s reactor 2, showing a 2-meter hole in the metal grating. High levels of radiation were detected after that discovery, according to reports at the time.

The quake in Japan this week came about one day after a large, magnitude-7.1 earthquake struck Mexico City, killing more than 200 people.

Reuters reported that as of Wednesday afternoon, Sept.20, 225 people had been killed.

The earthquake toppled dozens of buildings, tore gas mains, and sparked fires across the city and other towns in central Mexico. Falling rubble and billboards crushed cars.

Even wealthier parts of the capital, including the Condesa and Roma neighborhoods, were badly damaged as older buildings buckled. Because bedrock is uneven in the city built on a drained lake bed, some districts weather quakes better than others.

Parts of colonial-era churches crumbled in the adjacent state of Puebla, where the U.S. Geological Survey (USGS) put the quake’s epicenter some 100 miles (158 km) southwest of the capital.