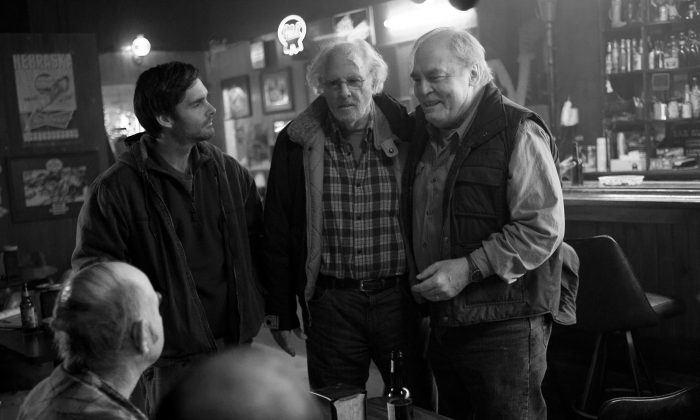 The Descendants director Alexander Payne once again has his eye in when it comes to delicately told parables of humdrum human existence, this time dealing with the onset of age and the domino effect it has on one particular backwater family.

The catalyst for the familial strife is Woody Grant (Bruce Dern), who we first encounter walking along the hard shoulder of a dual carriageway, destination Lincoln, Nebraska. He is under the impression that a magazine subscription mailer, informing him that he’s $1million richer, is genuine, and as such will do his utmost to claim it. Woody is an alcoholic, and the onset of early stage dementia doesn’t help his nearest and dearest communicate with him. His wife, Kate (June Squibb), suggests, “You know what I’d do with a million dollars? I’d put him in a home”, and his exasperated son, David (Will Forte), can’t keep abandoning his job at a hi-fi store in order to traipse around town after him.

So in a bid to put an end to the charade, and maybe give his father the faint glimmer of hope that his fantasy could be real, David decides on an impromptu road-trip to claim the prize. Along the way they make multiple stops, and as news of Woody’s new found wealth begins to spread, old friends and foes begin to emerge to stake a claim for their own share of the non-prize.

Nebraska is a viewing experience much like the road trip at the heart of the narrative. There is an air of reluctance during the initial parts – the monochrome picture postcard vignettes do very little to propel a rather ponderous tone, and Payne’s world is seemingly filled with caricatures who grate. But the beauty of staying onboard is that the journey seduces you, whether by projection, or just the heartbreaking story of what it’s like to see those around you grow old, and how you deal with the legacy left behind.

In Woody’s case he couldn’t really give a monkey’s, partially because he doesn’t remember, and also because he wants to forget most of the indiscretions that the road-trip reveals about him, and Bruce Dern is a fantastic embodiment of the cantankerous old man. Unrepentant and a man of few words, he shuffles around, clinging onto the last flicker of hope symbolised by the marketing letter, able to switch from a picture of mental vacancy, lost in the grip of dementia, to the knowing miserable grouch, which the film doesn’t shy away from hiding. It’s a brave, unsympathetic, and very sad performance, one which is the cold beating heart of the film.

Offering up a role for the viewer’s sympathies is Will Forte, who’s come a long way from MacGruber with his low-key, po-faced struggling son. He gets to carry the film’s emotional weight, and possibly the only resonant arc of the story, as he comes to terms with seeing his father vanish before his very eyes. It’s a mature turn that always rings true, and by the time the overwhelming but beautifully underplayed relationship reaches its quiet crescendo, you’re left in no doubt that it has worked thanks as much to Forte as it has Dern.

This will be remembered for one performance, though, and that is the outstanding June Squibb, who as mother and wife, gets to grandstand in the most spectacular, profanity-laden, say-it-like-it-is fashion. Whether she’s giving a graveside lowdown of all of Woody’s dead friends that wanted to get in her pants, or confronting a group of shameless relatives, she’s absolutely hilarious, and you can bet your false teeth that she’ll receive a Supporting Actress nod.

Nebraska is full of earned moments of narrative satisfaction. It works hard to get them, sure, and the point that the characters don’t have the money but they’re a lot richer come the end, is a little on-the-nose, but it’s an unforced fable that washes over you in the most delightfully whimsical fashion.