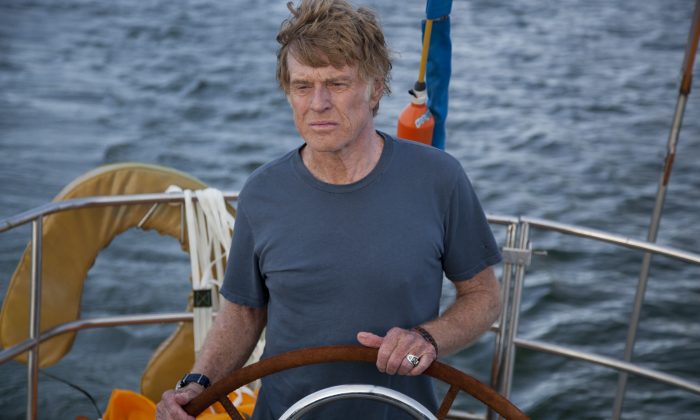 Whilst on a solo mission traversing the Indian Ocean, a journey unburdened with backstory, exposition, or even a name for our intrepid explorer (Robert Redford), a stray container pierces the hull of his sailing vessel. In one of many contrivances, the breach has meant his radio and navigation equipment has been destroyed. Not to worry though, this old man of the sea is a resourceful soul, and he manages to temporarily patch up the hole. His boy-scout skills are rewarded with the arrival of a storm of biblical proportions, one that batters his resolve, his yacht, and his chances of survival.

Cynics may suggest that this is simply Life of Pi but without the zoo, or Cast Away minus Wilson, so I’d offer up that this comes with a staggering central performance from 77-year-old Robert Redford. It anchors this tale of sea-faring disaster with a turn of such exhausting intensity and forlorn abandonment, that you feel like you’ve been thrown around by Poseidon himself.

Unavoidably a one-man show, honours must also go to director J.C. Chandor, who manages to sustain a level of interest that only threatens to capsize once the stupid shark sequence occurs, but even that is followed by one of many hypnotically beautiful shots from beneath the surface, which seem to be crying out for a David Attenborough voiceover.

The script never panders to the audience, only rarely orchestrating the action with an intrusive score; the rest is up to the viewer to figure out. We are given no details about Redford’s character, bar an opening, apologetic voiceover that has an air of regret about it. So we get the prominent wedding ring, thrust to the fore in order to emphasise that he does, or did have someone worth fighting to see again. Then there’s the unopened card that accompanies a vital sea-faring tool, briefly glimpsed and then never seen again. Shards of a life we’re asked to care about and thankfully do.

Redford is extraordinary, throwing himself around the rig with complete disregard for his advancing years, as he’s dragged underwater, knocked out cold, burnt by the sun, and cruelly punished by the elements. Only muttering the odd call-sign into broken radios, or letting out the most satisfying expletive committed to film, and with so little to feed off, it’s remarkable how he earns the our empathy.

It might have something to do with the trials that Chandor puts him through and the way in which the film intimately, patiently, helplessly manoeuvres him into position before something as incidental as a creaking deck can have you on the edge of your seat. As adept at creating the low-key tension, the film’s larger set-pieces are also handled in kinetic fashion, with the camera clinging on for dear life as much as Redford, and the roar of the wind being as powerful as the sound of any Kraken.

The only downside is that there are as many holes in the plot as there are in the boat. I’m no nautical expert but there were more than a few occasions during which intelligence, which has been at the forefront of the film, was seemingly abandoned in order to create excitement. But come the divisive, some may say unnecessary final sequence, you’ll have endorsed the words uttered by Redford from the outset – “I fought to the end” – and possibly think twice before booking a trip to the Norfolk Broads.