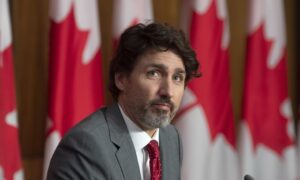 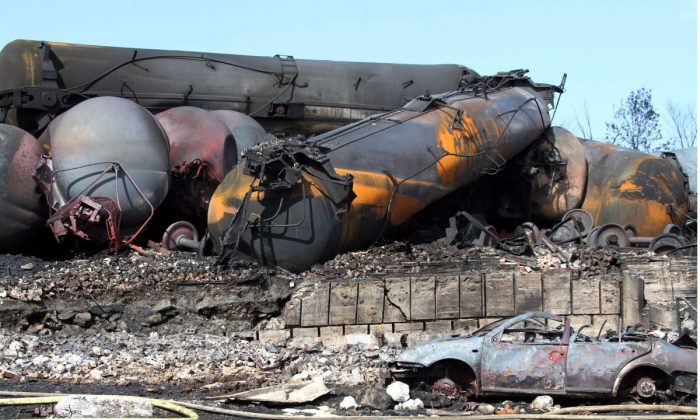 Transport Minister Lisa Raitt brought in tough new regulations on April 23, 2014 that require DOT-111 tank cars, like those pictured above at Lac-Mégantic, Quebec, after a fatal derailment, be upgraded or taken off the tracks. (The Canadian Press/Surete du Quebec)
Canada

The cars have been described as the workhorse of the North American rail system and make up as much as 80 percent of the Canadian fleet and 69 percent of the American fleet. Industry has orders for 55,000 more DOT-111 cars, about half the current fleet now shipping flammable liquids like crude oil in Canada.

The tank cars have been an ongoing concern to regulators in the U.S. and Canada. New regulations, effective immediately, will require the cars be upgraded within three years or they can no longer ship dangerous goods.

Under the new regulations, approximately 5,000 of the least crash-resistant Class 111 cars must be immediately removed from dangerous goods service, though they can be repurposed for other uses.

“The measures I am announcing today improve the safety of the railway and transportation of dangerous goods systems from coast to coast to coast,” said Raitt.

The Transportation Safety Board has been raising the issue of Class 111 cars for over 20 years.

“The government should ban all DOT-111 tanker cars from transporting oil starting today, because every day that they are on the rails is a roll of the dice with the odds weighted in favour of another disaster,” said Greenpeace Canada climate and energy campaign coordinator Keith Stewart.

Stewart said the new measures will not address the rapid growth of oil shipments on railways, which has increased exponentially, from 500 carloads of crude in 2009 to about 140,000 carloads five years later, according to the Railway Association of Canada.

Those numbers intersect with shipments figures in the United States due to the integrated rail system that spans the continent.

A report from the Association of American Railroads notes that in 2008, U.S. Class I railroads carried 9,500 carloads of crude oil. They projected up to 400,000 carloads in 2013. The report notes that some of that oil originated on railroads in Canada.

Greenpeace said a better solution is a move to green energy. Pipeline supporters say oil is better moved underground, although rail operators say they spill less crude as a percentage shipped than pipelines.

The rail industry and Transport Canada have faced sharp criticism due to declining inspections on railways and the unchecked rise of oil shipments.