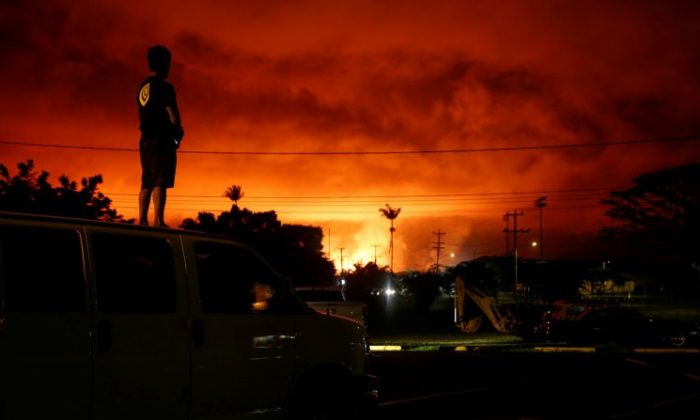 Darryl Sumiki, 52, of Hilo, watches as lava lights up the sky above Pahoa during ongoing eruptions of the Kilauea Volcano in Hawaii, on June 2, 2018. (Terray Sylvester/Reuters)
US News

In a 24-hour span this week, nearly 500 earthquakes hit the Kilauea volcano in Hawaii, and one of the quakes registered 5.3 on the Richter scale.

A 5.3-magnitude earthquake shook the Big Island on Wednesday, KHON2 reported. No tsunami was reported.

Officials said that the earthquake was likely associated with an eruption at the summit of Kilauea at around 3:20 a.m. local time, KHON2 reported.

Jon Bellini, a geophysicist from the U.S. Geological Survey in Colorado, told the Express, “All these earthquakes are being caused because of the ongoing eruption in Hawaii.”

“Hawaii is an active volcanic area, and has recently increased dramatically over the past month,” Bellini said. “The eruptions are formed because of magma moving underneath the volcano, draining from different areas and causing the land surface to change in elevation.”

He added, “It is the movement and flowing of magma below the crust that is causing the rise in earthquakes on the island of Hawaii.”

In early May, Hawaii’s Big Island was hit by a 6.9-magnitude earthquake, generating small tsunami waves.

Richard Rapoza, a spokesman for the Hawaii Emergency Management Agency, gave an update on the volcanic eruptions and lava flow.

“The summit itself is fairly stable, with continued seismic activity and a high likelihood of additional small explosions,” he said, according to the paper. “The lava flow is contained with a channel flowing to the ocean with only minor outflows.”

On Tuesday, CBS News reported that nearly 700 homes had been destroyed by lava from Kilauea.

Bob Fenton, FEMA administrator for the region, told CBS that he was “amazed at the amount of devastation” wrought by the volcano, adding that it is “going to take a whole community effort” to recover.

Last week, 320 homes were destroyed, said Hawaii County Mayor Harry Kim. “What we lost is the most beautiful place on earth,” he lamented, according to the Honolulu Star-Advertiser.

The U.S. Geological Survey’s Hawaii Volcano Observatory has warned that the point where lava enters the ocean is particularly dangerous.

“Venturing too close to an ocean entry on land or the ocean exposes you to flying debris from sudden explosive interaction between lava and water,” the agency warned, according to USA Today. The area near that interaction, it noted, is quite unstable, causing collapses if one were to walk on it. It also warned about laze, which is a corrosive plume caused by lava and sea water that can irritate the eyes, lungs, and skin.