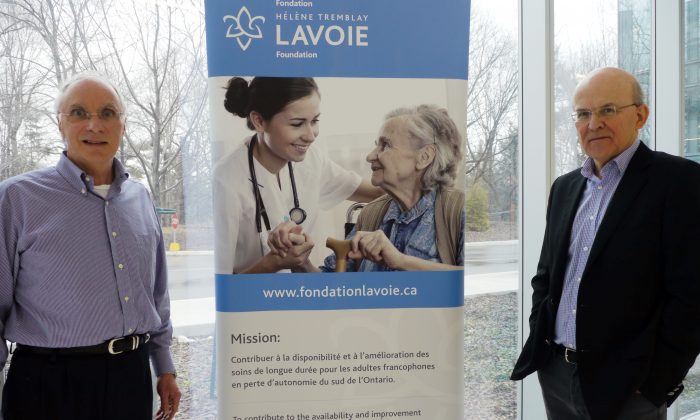 Jean Roy(L), Chairman of the Board of Directors of the Hélène Tremblay-Lavoie foundation and Guy Proulx, neuropsychologist and professor in the Department of Psychology at Glendon College, pose in Toronto on April 13, 2013. (Thibault Jourdan/AFP/Getty Images)
Canadian Content

A recent court challenge before the British Columbia Supreme Court had threatened to change the rules of the game for the Canadian health care system, should the challenge make its way to the Supreme Court of Canada and be successful.

Dr. Brian Day of The Cambie Surgeries Corporation is contesting the ban against “extra billing” for privately provided health services, and for the right of doctors to work simultaneously in both the public and private health spheres.

However, just last week the British Columbia judge adjourned the case to March of next year to allow those involved the attempt to resolve some of the issues before the court. It is, therefore, not likely to be the game-changer that some Canadians hoped and many Canadians feared.

One thing is certain: Pundits from the left and right are sure to weigh in further on the issue, especially with similar court challenges popping up in other provinces.

How our health system should be reformed, and in what measures, is nothing short of a national pastime in Canada. Too bad many get the facts wrong. Here are a few basics everyone should know. 1. Doctors are self-employed, not government employeesCanada has a publicly funded health care system, but the vast majority of doctors do not work for the government. Patients are free to choose which doctor they wish to visit, and they are entitled to essential physician health services without charge. Doctors are self-employed, which means they can determine their own hours and work location, and they are responsible for paying their employees, for office space, and other overhead expenses. Doctors earn money by billing their provincial government for the services they provide to patients.

The Canadian health system is often referred to as “socialized” medicine, but it is actually a mix of private providers billing governments for publicly funded services. 2. Canada has 15 different health care systemsPeople often refer to the “Canadian health care system” when, in reality, it has distinct health systems for each of the provinces and territories. The Canada Health Act outlines the basic tenets for health care to be universal and accessible for essential physician and hospital health services across the country. However, the details of how each system operates, including what is covered and how, are determined provincially. In addition, the federal government has responsibility for aboriginal and veteran health care.

Add it together, and Canada has a whopping 15 unique health care systems. On the plus side, this means provinces can tailor health services to the particular needs of their residents; the downside is that coordinating health reforms across the country remains a significant challenge. 3. Funded health care services are not provided equally across the countryThe Canada Health Act guarantees that essential physician and hospital services are paid for by the government, but there is variation across provinces for what is considered an “essential health service”—and even who delivers the care or where care is delivered.

For example, Quebec’s publicly funded system includes fertility treatments, while most other provinces do not. Some provinces, including British Columbia, Ontario, and Quebec, pay for births delivered by licensed midwives, while several provinces and territories do not. Eligible funded therapies for autism vary widely across the country. Abortion services are not equally accessible across the country.

The Canada Health Act does not cover prescription drugs, home care, or long-term care, and as a result, there are widely different approaches for these services in each province.4. User fees charged to patients are not permittedCanadians cannot be charged a “user fee” when a physician provides an insured service (something already covered by the publicly funded health system). But some physicians get around the letter of the law by charging “annual fees” as part of a comprehensive package of services they offer their patients. Such charges are completely optional and can only be for nonessential health options.

In some provinces, doctors may charge a small fee to the patient for missed appointments, for doctor’s notes, and for prescription refills done over the phone—all items for which a doctor receives no payment from the province.
5. Canada does not truly have a “single payer” system, meaning a significant portion of Canadian health care comes from both public and private financingCanada has extensive public financing for essential physician services and hospital care—among the highest rates in the world. But most Canadians have to pay for eye and dental care out-of-pocket, and more than 60 percent of prescription medications are paid for privately in Canada.

Canada is the only country with a universal health care system that does not include prescription drugs. This means that Canadians still pay for approximately 30 percent of their health care directly or via private insurance with only 70 percent of health costs paid for publicly. In fact, Canadians are as likely to hold private health insurance as Americans. Kathleen O’Grady is the managing editor of EvidenceNetwork.ca and a research associate at the Simone de Beauvoir Institute, Concordia University, Montréal, Québec. Noralou Roos is a professor in the Department of Community Health Sciences, Faculty of Medicine, University of Manitoba and director of EvidenceNetwork.ca. This article previously published at TroyMedia.com.