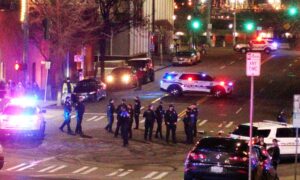 5 Police Officers Hospitalized After Fleeing Car Plows Into Them

Five police officers were taken to the hospital after a car reportedly rammed into them after being pulled over in Meriden, Connecticut, on Monday.

Authorities said that the vehicle description matched that of a car used in a recent shooting, NBC Connecticut reported.

When the police officers proceeded towards the car, the driver allegedly crashed into two marked police cruisers and into another undercover vehicle, police told the news outlet.

As the car started ramming both the police cruisers and the undercover police car, the officers that had approached on foot were hit.

The car then managed to make enough room to escape via the sidewalk.

Police were able to track the car.

The people inside the car started to flee on foot, and were apprehended after a short pursuit. The officers witnessed a fugitive discard a weapon, which was later found, as well as an additional weapon.

According to the CDC, motor-vehicle accidents are the number one cause of line-of-duty officer casualties in the United States, making up 43 percent of all line-of-duty deaths.

From 2010-2019, 393 officers died due to vehicle crashes and 132 died due to being struck by a vehicle. In that time span, one officer has been killed on average per week on the roads, the main cause being hit by motor vehicles while on foot.