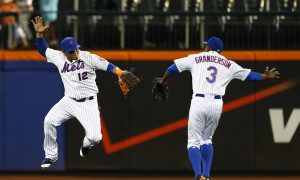 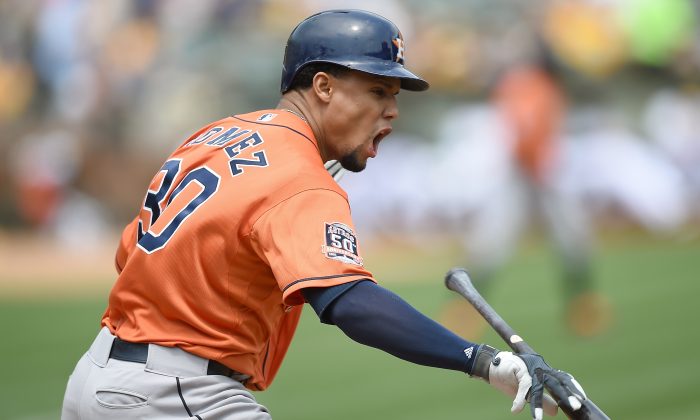 Carlos Gomez of the Houston Astros reacts and tosses his bat after he hits a fly ball for an out to right field against the Oakland Athletics. (Thearon W. Henderson/Getty Images)
Baseball

Baseball is not a violent sport by nature. Of course, nature doesn’t account for any of the seemingly dozens of unwritten rules of the game, which may or may not result in a violent, all-out brawl. These unwritten, yet very serious rules, are seemingly made up on the spot and are generally at the discretion of those who are offended.

In fact, a new one was just enacted in late August when when Houston’s Carlos Gómez—in frustration at himself—flipped his bat and screamed at himself after just missing a pitch he thought he should have hammered out of Yankee Stadium during the sixth inning of a 9–0 Astros/Yankees game. This display of displeasure at himself for not adding to the Yankees misery was a clear no-no and didn’t sit well with Yankee manager Joe Girardi, who had some words for him as the benches started to empty.

But this latest unwritten rule isn’t as well-known as some others—despite their not being written down anywhere. They also don’t seem to apply to other sports. Baseball is special though. Here’s the list:

Imagine if the next time you saw someone score a touchdown, they just carefully handed the football to the ref and then ran to the sideline without as much as a peep of celebration for fear of offending the opposition? Crazy, right? Yet in baseball, even the slightest excitement or celebration after a home run—be it a bat-flip, a slow jog around the bases, or just enjoying watching where the ball eventually lands—can set off the apparently always-fragile pitcher and his equally-hurt teammates.

Of course, this long-standing rule of conduct, is also dependent on the person who hits it. If you’re a veteran like David Ortiz, no one’s going to say anything as you flip your bat and do your slow jog around the horn. Others—with less seniority—might not be so lucky.

2. Don’t bunt in an attempt to break up a no-hitter.

Bunting is legal. It’s a skill that requires perfect placement of the bunt and exceptional speed running to first base. But if a pitcher has a no-no in progress—especially in the late innings—it suddenly becomes legally illegal and will result in the start of World War III if even attempted. It’s unwritten that any hit that breaks up a no-hitter must be well in play—preferably going past the infield. After you get the first hit out of they way though, bunt all you like. It becomes legal again.

3. Don’t walk through the pitcher’s mound.

This was an unknown rule until former Oakland pitcher Dallas Braden thought it up a few years ago. Braden took issue with A-Rod (who had been on first base) jogging through his mound on his way back to first following a foul ball that went out of play. Of course, had it not been the ever popular A-Rod who committed this particularly heinous crime, Braden might have let it go. It’s like the anti-David Ortiz rule. Either way, this particular crime hasn’t been committed of late.

4. You’re allowed to slide hard into/past/beside second base to break up a double-play—but not too hard.

This is a delicate one. You can slide hard, or well past second base—or even several feet beside it—in an attempt to collide with the guy trying to throw to first to complete the double-play—but not too far. How far can you go? It’s actually an arbitrary distance that’s measured solely by how badly the player you crash into is hurt. If he’s fine, you’re fine. If he’s hurt, you went too far and will probably be reminded of that the next few times you bat.

Here’s a seldom-broken one that tends to really infuriate the opposition if violated. If there’s an infield pop-up to the third baseman and you’re rounding third, don’t yell “Ha, I got it!” to fool the opposition into thinking another player has it—and then flatly deny it later on, while sporting a confused look on your face. And yes, this is the second unwritten rule that was necessitated by the ever-popular A-Rod, who made enemies with Toronto (he wasn’t exactly fan favorite there to begin with) a few years back with this particular tactic.

(In honor of A-Rod, we could have also listed the rarely seen don’t-slap-the-ball-from-the-pitcher’s-glove-and-then-act-shocked-when-you’re-called-out-at-second rule, but since it’s been more than 10 years since a certain someone tried it, so we didn’t.)