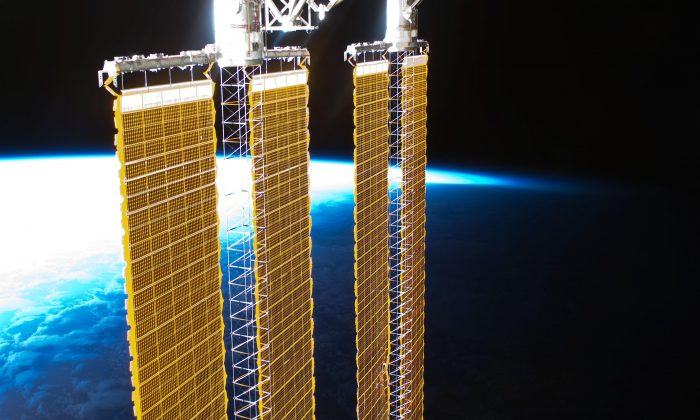 Solar panels on the International Space Station. China wants to build space solar collectors many times larger that would send energy back to the ground by laser or microwave (NASA).
China

The Chinese regime takes pleasure in dedicating funds and resources to ambitious and widely publicized engineering projects. The intent: to glorify the Chinese nation with record-breaking achievements. But often enough, the projects are simply extravagant. Many Chinese think officials would be better off focusing on actual problems, like the gap between the rich and poor, and the pollution which chokes China’s cities.

Here are some of the most impractical—and often, ill-conceived, even when apparently well-intentioned—engineering projects that China has conjured up in recent years. It remains to be seen whether any of them will actually reach fruition.

In April 2014, Chinese military sources declared they were developing a submarine capable of traveling 6,100 mph and covering the distance from Shanghai to San Francisco in just 100 minutes. They claimed the use of supercavitation, a process which creates a bubble of vapor around the traveling object to reduce friction and increase speed, would allow such a possibility.

But others aren’t so optimistic. Physicist and naval weapons expert Norman Friedman of the U.S. Naval Institute doubts its plausibility. The Russian Shkal, the most well-known supercavitating torpedo, only reaches a speed of about 230 mph, and only for a short distance due to structural limitations. Furthermore, supercavitation makes it impossible to steer, as the rudder would pierce the bubble of vapor.

In short, it’s unlikely anyone in the near future will travel from the United States to China in a mere two hour journey.

Last year, Chinese weapon designers pitched an idea to the Chinese military for a massive robotic spider, called a “crab walker.” A supposed spider tank, it will be 18 feet long and mounted with a 30mm cannon. It technically has 11 legs, with 8 main legs, 2 legs in the rear to stead itself during firing, and another stabilizing leg in the front. Unlike normal tanks, this spider machine will be able to navigate rocky terrains. The Chinese regime seems serious about this project, and engineers at Nanjing University of Technology have published several reports discussing the developments of the design.

In a remarkable display of creativity, Huainan City invested $290 million (1.8 billion yuan) to building a ping pong paddle, football, soccer ball, volleyball, and basketball. But they’ll be massive ones in the form of an Olympics sports complex. The ping pong paddle will be a hotel; the football, a stadium; the soccer ball, a public gym; the volleyball, a swimming and diving center; and the basketball, a sports center.

According to China Daily, a state-run newspaper in China, the Ping Pong Paddle Hotel will contain rounded guest room windows to mimic the texture of a ping pong paddle, and the handle of the paddle will be an observation deck.

4. A Railroad from China to the US

In May 2009, Chinese state-run media announced plans to build an 8,000 mile bullet train railway to America that would cross through Russia, Alaska, and Canada, before reaching the continental U.S. The train ride would take less than two days.

Skeptics cite the engineering obstacles involved with building the underwater tunnel from Russia to Alaska as well as the financial challenges.

In late March, state-run Xinhua News Agency reported that Chinese researchers were designing a trillion-dollar solar station in space. While Chinese authorities say it’s a power station, some analysts believe it could be used as a weapon. Xinhua said this power station will be “equipped with huge solar panels” and will help to “dispel smog, cut greenhouse gases, and solve the energy crisis.”

The design was based on the idea that solar panels in space would get constant sunlight, unlike solar panels on Earth. But engineers will have to develop thinner solar panels, and China does not currently have the technology to send the energy efficiently back to Earth as microwaves or lasers.