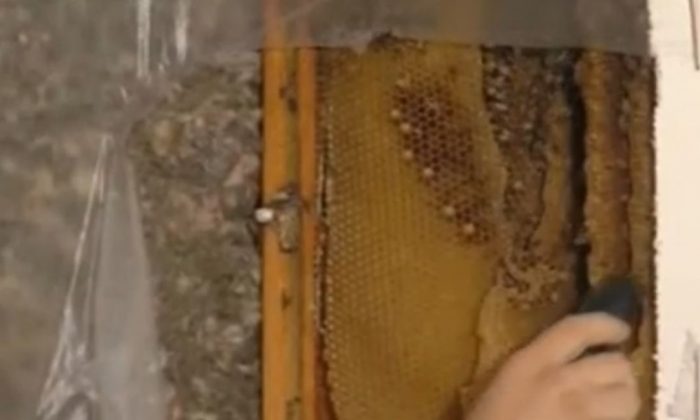 A screenshot of WCSH TV shows the bees in the Provo, Utah home.
US

A beekeeper has removed massive amounts of bees–around 40,000 of them–from a bedroom wall in Provo, Utah.

When Tyler Judd and his wife moved into their home several months ago, they noticed some bees inside their home, but they didn’t expect there to be literally pounds of the insects in their home.

“We were just sitting on our couch, turned off the TV and could hear some buzzing in the walls,” Judd told WCSH-6 television.

The couple then called a beekeeper, who made the startling discovery.

Beekeeper Al Chubak said the bees were further colonizing the home and were destroying the insulation at the home.

“They’re actually taking the insulation out and they’re putting their honeycomb and their hive in its place,” Judd told KSL-TV.

Chubak removed the colony of bees with a shopvac and placed the honeycomb in boxes to relocate them. He said that he needed to remove the whole hive instead of just the bees.