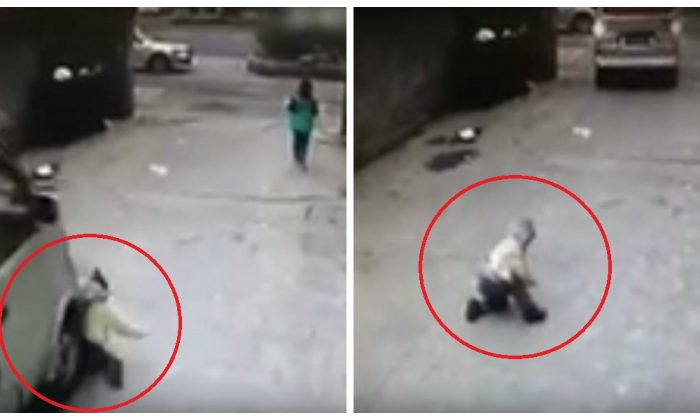 For a heart-stopping split second, the little Chinese boy lay motionless on the ground in a small side alley. Just moments earlier, a silver van had hit the boy, its right front and rear tyres rolling over the tiny white-hooded frame in sickening jerks.

On March 15, Chinese media reported the hit-and-run incident, which took place at about 5:00 p.m. in the city of Nanjing. Video footage showed the van driver over a 4-year-old boy at some speed before turning the corner and driving off, without missing a beat.

Miraculously, the child got up almost as soon as the van drove out of the alley, and took several steps before keeling over. According to the report, the boy, Xuan Xuan, eventually walked to a candy store. He was only taken to the hospital for a check-up after his sister informed their parents of what happened. It was found that the boy had merely suffered minor scratches on his head.

The driver has since been detained by the police. He claimed that he missed the boy due to the van’s blind spot, and didn’t stop after running over the boy because he presumed that he had run over “a manhole.”

This is not the first time the driver in a hit-and-run incident in China has come out with a questionable excuse. Just three days ago, also in Nanjing, a driver ran over a drunk woman and sped away, reported Chinese news portal Sohu. “I thought I had run over a mannequin, that’s why I didn’t stop,” the driver said, to an incredulous response.

There have also been well-known incidents of young children being run down by careless drivers. The most well-known case took place in Foshan, Guangdong in 2011, when a toddler named Wang Yue (or “Little Yue Yue”) was hit by a van, and then moments later, a big truck. The case sparked national self-reflection after it was found that 18 people saw the crushed child on the road without stepping in to help.

On Kdnet, a popular online discussion forum in China, netizens condemned the driver of the recent hit-and-run, and expressed amazement at how the child emerged practically unscathed from the accident.

One netizen going by the name “bj200888” wrote: “It’s a miracle. A person is surely blessed with great fortune having survived such a serious accident.”

“Stunning! It seems like a protective deity is watching over him,” said a netizen with the moniker “Fan of Red Chamber.”

However, one netizen warned: “It’s too early to say if he is alright. Be alert for any signs of hidden internal injury.”