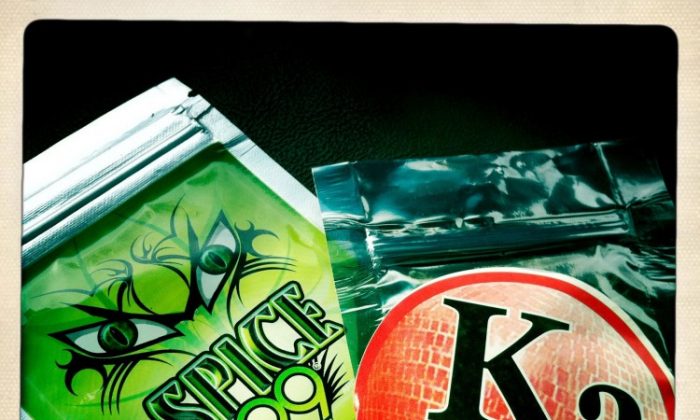 Synthetic marijuana, such as the two packages shown, were banned in New York City and state by the city and state Health Departments. (Drug Enforcement Agency)
US News

At least four people died and 140 got sick in Washington, likely from a bad batch of synthetic marijuana, known as K2 or “Spice,” according to local officials.

A D.C. fire department and EMS spokesperson told Fox5 that there have been about 140 cases of individuals falling ill after using Spice since Saturday.

In one instance, a firefighter said that 11 people were sickened in the city’s E and 3rd streets in northwestern D.C. at around 5 p.m. Wednesday.

Those people, he said, looked like zombies from “Night of the Living Dead.”

Many of the alleged Spice overdoses have taken place near a homeless shelter at 2nd and D streets.

Fire officials also said that being dehydrated from the summer heat can make Spice users more susceptible to overdoses.

Earlier this year, in Illinois, at least 100 people got sick and three died from synthetic marijuana.

“Each day we’ve seen the number of cases rise,” said the director of the Illinois Department of Public Health (IDPH) Nirav D. Shah in a statement at the time. Shah added: “Synthetic cannabinoids are unsafe. They are not regulated and people don’t know what chemicals may be in them, like rat poison. While efforts are underway to get the contaminated drugs out of circulation, it’s possible they could re-emerge. We urge people not to use synthetic cannabinoids now or ever.”

The U.S. Centers for Disease Control says that synthetic marijuana is often available for purchase at convenience stores or online, depending on the area, despite a federal ban on most products and local or state bans.

Manufacturers often slightly tweak the ingredients and the names when their products are targeted. Some brand names include K2, Spice, and Kronic. K2 and Spice have become slang for the drug, despite the brand.