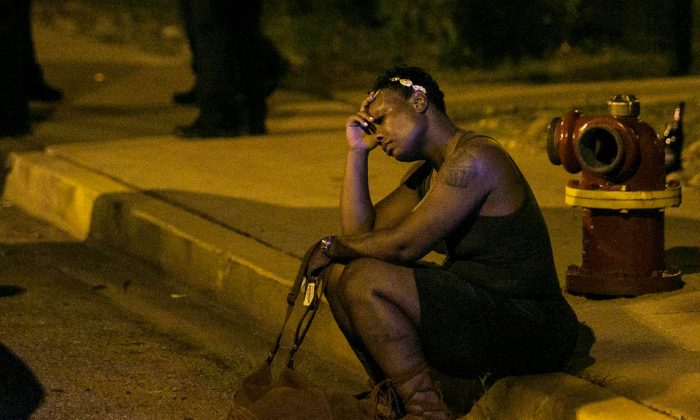 At least 43 people were shot, five fatally, in Chicago over the weekend, according to Chicago police.

The shootings took place between Friday evening and Monday morning—adding to the city’s burgeoning 2016 death toll.

Among those killed was pregnant 19-year-old Parasha M. Beard, who was gunned down at around 6:10 p.m. on Sunday in the South Chicago neighborhood, but doctors were able to save the child.

“Thank God that her baby that she was pregnant with is surviving right now,” Beard’s mother, Crystal Jones, told the Chicago Tribune. “Thank you God, have mercy on me.”

A 26-year-old man was also shot in the incident. Beard and the unidentified man were in a parked car in the 8700 block of South Marquette Avenue. A vehicle drove past them and a person with dreadlocks inside opened fire, hitting both in the neck, a police spokesman said, according to the Chicago Sun-Times. They were taken to Northwestern Memorial Hospital, where Beard was later pronounced dead.

The unidentified man was listed in critical condition, and police said he has known gang ties.

No suspects have been arrested.

According to CBS Chicago, four other people were murdered over the weekend. On 4 a.m. Sunday in the Old Town neighborhood, a person walked out of a fast food establishment and opened fire on two men before escaping in a Chevrolet Tahoe, police said. The two men were taken to a nearby hospital, where one of them was pronounced dead. Their names weren’t released.

A man was shot at around 2:25 a.m. Sunday in the South Side neighborhood. Kiev Dobbins, 24, was found dead with several gunshot wounds, police told CBS.

At 2 a.m. on Sunday, a 36-year-old man was shot and killed after a dark-colored SUV pulled up alongside him and a gunman inside the vehicle opened fire, said police. His name wasn’t released.

And on Sunday at around midnight, in the Southwest Side, 20-year-old Tontriche Weathersby Jr. was shot at a party. He got into an argument, and the other person involved in the dispute shot him in the chest, police said. He was taken to a nearby hospital, where he was pronounced dead.

More than three dozen people were gunned down over the weekend, according to CBS.

In 2016, at least 514 people have been murdered in Chicago—far outpacing the past several years, according to DNAInfo.