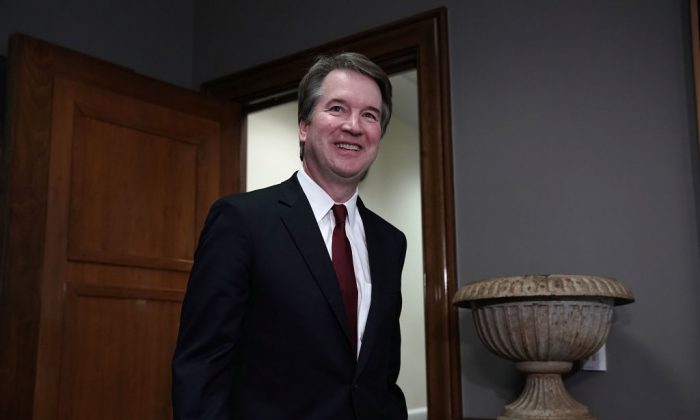 “We make this request based on his track record of upholding the Constitution and his distinguished credentials that eminently qualify him to serve on the nation’s highest court,” the letter states.

President Donald Trump nominated Kavanaugh to replace retiring Supreme Court Justice Anthony Kennedy. Before the nomination, Kavanaugh was a judge for the District of Columbia Circuit of the U.S. Court of Appeals.

In addition his service on the court of appeals, Kavanaugh taught law at Harvard and Yale universities for more than a decade. The White House previously shared a letter from 80 of his students.

“As his record shows, he will interpret the Constitution as written, informed by history, tradition, and precedent,” the letter from the governors states. “Judge Kavanaugh will adjudicate legal disputes with impartiality, preserving the Constitution of the United States and the rule of law.”

Republicans hold a slim majority in the Senate and plan to vote on the confirmation before the midterm election in November. Democrats are seizing on Kavanaugh’s giant paper trail in a bid to delay the confirmation.

In the run-up to the vote, Kavanaugh is meeting with senators on Capitol Hill. Kavanaugh had five individual meetings scheduled with Republican senators on July 25. Democrats are refusing to meet the judge until an agreement is reached with the White House to produce records related to his tenure there during the George W. Bush administration.

Kavanaugh was Kennedy’s law clerk on the Supreme Court.

“Thirty years ago, President Ronald Reagan nominated Justice Anthony Kennedy, a man who devoted his career to securing the liberty of our nation, to the Supreme Court of the United States,” the letter from the governors states. “It seems right and fitting for one of Justice Kennedy’s own law clerks to follow in his footsteps and continue our nation’s great tradition of the rule of law.”