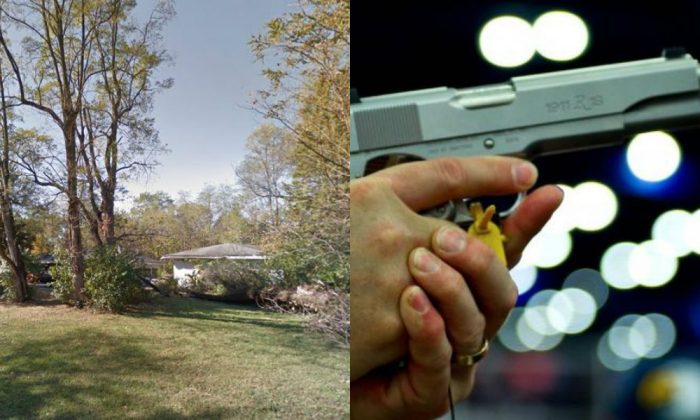 A woman shot and killed an alleged burglar during a home invasion in Trotwood, Ohio, according to police.

Police said the unidentified woman opened fire on three men who broke into her home at 6 a.m. She killed one of them during the alleged robbery.

Officials said the woman was at home with her four children, WDTN reported.

But at one point, the woman got away and grabbed a gun hidden inside her dresser. She then opened fire on the suspects, and they ran out of her home.

A bullet hit one, and that suspect was found dead on a neighbor’s yard about 300 feet away from her home. The suspect was identified as Azikiwe Presley, 29, of Dayton, Ohio.

WHIO-TV reported that Presley’s death is considered a homicide, but police have not pressed charges against the woman.

“There’s obviously some reason why they picked this house. We’re still not sure as to the reason or the motive,” Trotwood Police Captain John Porter was quoted by local media outlets as saying.

“We do know that the male, who is divorced from the female there, uses the home still as a business address.”

The woman also called 911, and her call was recorded.

“I got my gun and I started shooting and they ran,” the woman told dispatchers, ABC 22 reported. “They all three had guns, I’m confused … they must not have had bullets because after I pulled the trigger they just took off, instead of firing back. I don’t know if I hit one or not, I don’t see blood anywhere.”

The three suspects were caught on a surveillance camera before they kicked the door in.

The woman’s ex-husband told WHIO-TV he’s grateful that her gun was within reach, saying the situation could have been much, much worse.

This story is #trending on #Facebook, so ICYMI: a #Trotwood, #Ohio woman fatally shot a suspect in a home invasion https://t.co/keK2G9R9mB

“You can accept anything, anywhere else, but not my house,” the man, who was not identified, told the station.

“I never can conceive that somebody would kick the door in, to put my kids’ life in jeopardy. I just couldn’t. I can’t believe it.”