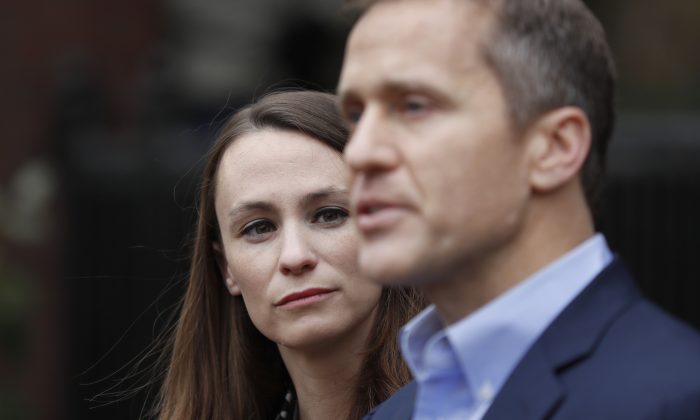 3 in Custody in Robbery of Wife of Missouri Governor-Elect

ST. LOUIS—Three teenagers are in custody in the armed robbery of the wife of Missouri Gov.-Elect Eric Greitens, and the former Navy Seal officer who takes office next month said Tuesday it’s a good thing police got to them before he did.

Eric and Sheena Greitens spoke at a brief news conference, one day after Sheena Greitens was robbed at gunpoint while in her car outside a coffee shop in St. Louis. She was unharmed.

Sheena Greitens, 34, said she was thankful for the outpouring of support she received.

“We are also aware that what happened to me and to our family last night happens to far too many people and far too many families across this city and this state, and that cannot continue,” she said.

Eric Greitens, a Republican who defeated Democratic Attorney General Chris Koster in the November election, was emotional during the three minutes in which he spoke to the media. He declined to take questions.

“As a husband my first thought was for Sheena’s safety,” Greitens said. “My second thought was for justice. I’m glad that the men and women of law enforcement found these young men before I did.”

Neither he nor his spokesman, Austin Chambers, would elaborate.

Police said the suspects, ages 14, 15 and 19, were involved in several crimes Monday.

Sheena Greitens had just arrived shortly after 6 p.m. at a coffee shop in the Central West End, a wealthy area of the city, where she planned to do some work, Chambers said. She was looking at a cellphone in her car when a young man opened the door, pointed a gun, and demanded her belongings, police said.

The suspect took her phone and laptop and ran, along with the others. As police were investigating that crime they learned that another car in the same parking lot had been broken into. Police were able to track that victim’s cellphone, which was in a moving car on a nearby street.

When officers got behind that car it tried to flee, prompting a brief chase that ended in a crash, police said. The suspects ran but were quickly caught.

Police then determined that the car had been stolen and had been used in another robbery attempt moments before the attack on Sheena Greitens.

The 19-year-old suspect, Marquay Beard of St. Louis, was charged Tuesday with second-degree tampering with a motor vehicle. Susan Ryan, a spokeswoman for the circuit attorney’s office, would not speculate if additional charges would be filed against him but said the investigation is ongoing.

It was unclear if the younger suspects would be charged as adults. Juvenile court records in Missouri are not open to the public.

Eric Greitens fought back tears as he expressed sorrow for the families of the suspects. He said he hopes to meet with those families to discuss ways to battle crime.

“If we continue down our current path, it will continue to lead to more disorder, more lawlessness, more chaos, people living further and further apart from each other, divided by fear,” he said.

Missouri Highway Patrol Capt. John Hotz said the patrol now is providing security for Sheena Greitens. The patrol provided security for the governor-elect immediately after the election, but Hotz said security detail for the spouse typically begins once the new governor takes office.