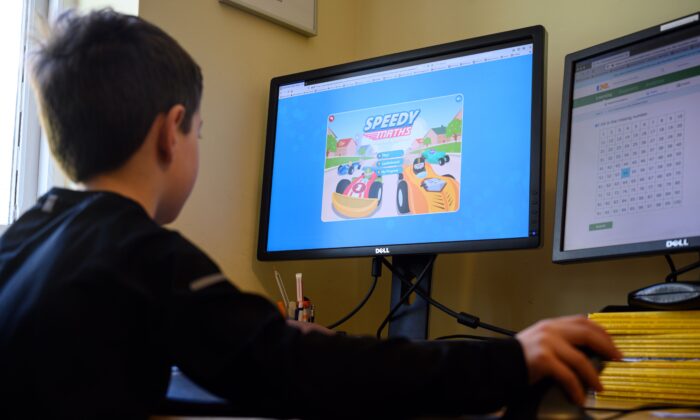 A 6-year-old boys learns online during a CCP virus lockdown in the village of Marsden, near Huddersfield, northern England, on March 23, 2020. (Oli Scarff/AFP via Getty Images)
UK

Pupils in England were catching up with their learning in autumn 2020, only to see some of their progress obliterated during the second lockdown of schools, government-commissioned research has found.

To curb the spread of the CCP (Chinese Communist Party) virus, schools in England were ordered to close between March and August 2020, and between January and March 2021. Vulnerable children and children of keyworkers were allowed to attend schools, and a few year groups were in schools for a while during the fist lockdown.

In the interim report on school recovery strategies (pdf) published on Tuesday, researchers found that apart from the CCP virus restrictions and staff and pupil absences, the differences in pupils’ progress have been the most common challenge among primary schools in autumn 2020, while secondary school pupils were struggling with emotional and mental health problems.

The disparities in pupils’ social, emotional, and academic progress have also increased over the academic year, with pupils from disadvantaged backgrounds who didn’t attend school or engage well online “most profoundly impacted by the COVID-19 pandemic.”

During the interviews, headteachers suggested that “pupils had made some progress in catching up in core subjects,” but by summer 2021 “some of these academic gains were seen to have been lost.”

By the end of the autumn 2020 term, headteachers suggested that pupils had made some progress in catching up in core subjects, but by the summer 2021 term after the third lockdown from January to March 2021, some of these academic gains were seen to have been lost.

Patterns of attainment were reported to vary even more widely between individual pupils and differed across classes and year groups, with wider and more complex differences in attainment in March 2021 compared to September 2020.

The varying degree of access and engagement with remote learning contributed to the widening gap among pupils, as well as the difference between those who were allowed to attend school and “those struggling at home.”

The report also said that pastoral issues—including conflicts among pupils and anxious, upset, and bereaved pupils—”were more prevalent and acute in March 2021 compared to the autumn 2020 term, due to time away from peers and school.”

Head teachers also mentioned “unexpected behaviour issues” that occurred in March, such as “resentment or conflict from pupils learning from home towards those attending in person during lockdown.”

But some pupils, “for example pupils whose parents were able to invest more time in home schooling, or those for whom school was not the best learning environment,” made better progress than expected, according to the report.