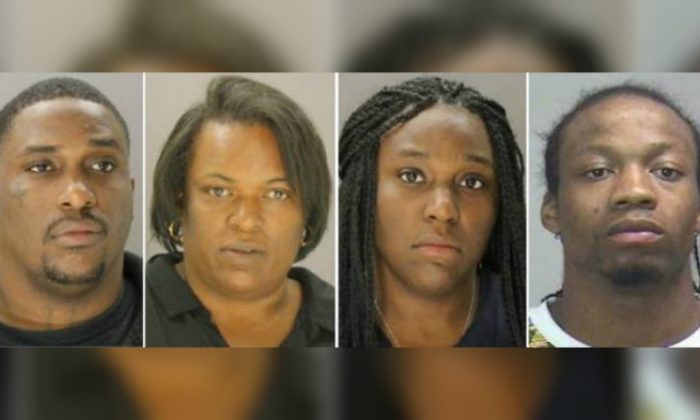 Three Dallas family members were sentenced to prison this week for brutally beating a teenager to force a miscarriage and cover up rape.

The victim, who is now 19, was raped by a fourth family member when she was 13, the Dallas News reported. When the family discovered that the girl was eight months pregnant, they gave her birth control pills and cinnamon tablets.

When the drugs didn’t cause a miscarriage, the family members held down the victim and took turns stomping on her belly.

“They held her down. They forced her to lay there while people stomped her,” prosecutor Rachel Burris said during the sentencing, according to Dallas News. “I️t was savage.”

The family left the teenager bleeding in a bathtub after the assault. The girl lapsed in and out of consciousness as her younger sister tried to care for her.

When the victim delivered a stillborn child, the family tried to dispose of it by burning it on a grill. When that didn’t work, the matriarch paid one of her sons to get rid of it.

Another man who participated in the attack, Lonnell McDonald, was convicted in 2016 and sentenced to 10 years in prison.

The victim first reported in 2015 that her brother, Robert Cayald, 24, raped her in 2012. The victim became pregnant from the attack. Cayald’s case is still pending because he was found incompetent to stand trial last year.

According to an arrest warrant affidavit, the family became nervous about the pregnancy because they thought Child Protective Services would take their children away when the rape was discovered.

The family then took matters into their own hands.

Cecilia McDonald held the girl’s arms while Lonnell McDonald sat on her pregnant belly and bounced up and down, Fox 35 Orlando reported. Later, Cedric Jones came over and kicked and punched the girl repeatedly. The teenager was given no medical attention before or after she delivered the stillborn child.

After police became involved, Child Protective Services rescued seven children from the home. The victim has lived with an adoptive family since.

“She lost a child, and no one cared,” Burris said. “That night the people who promised to love her … left her.”

The defense argued that the trio led otherwise good lives, saying that they’ve heard nothing but good things about Sharon Jones and that Cecilia McDonald is the perfect candidate for a second chance. The defense also noted that Cedric Jones Jr. has a low IQ and thought he was helping his family.

“Most people would treat strangers better,” Burris said. “Yet these people did it to someone they promised to love.”