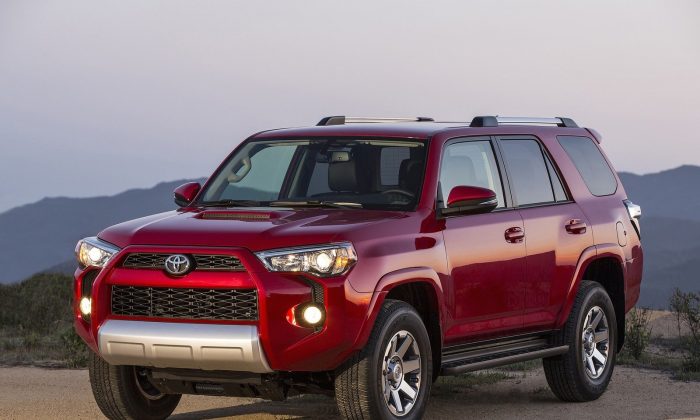 The 2015 Toyota 4Runner feels exactly like you would expect a body-on-frame truck to feel – very truck-like. In fact, the 4Runner is one of the few sport utility vehicles left that harkens back to the 1990s possessing loads of utility including considerable off-road prowess. The two other contemporary vehicles in direct competition with the 4Runner that come immediately to mind are the Jeep Wrangler and Nissan Xterra.

For the 2014 model year, Toyota reworked the front-end styling, and modernized the interior with a new instrument panel and a touchscreen audio interface via Toyota’s Entune system. The revised exterior facelift includes a taller hood, a bigger grille, and an angular headlight design with projector beams rather than halogens. The base SR5 has body color grille and bumper, while the Trail edition gets a special front bumper, and the Limited gets chrome plating on the grille and bumper. But left in place are the same body-on-frame platform and 4.0 L V6 engine with 5-speed automatic transmission used since introduction seven years ago on the 2009 model.

This is not to say that the 4Runner, even if used strictly on-road, doesn’t have some winsome qualities including its comforting go-anywhere stance that includes large all-terrain tires not usually found on the standard crossover, rugged exterior styling and considerable cargo capacity measuring nearly 90 cubic feet with the rear seatbacks folded.

Despite the 4Runner’s aging platform and rather anemic gas mileage (17 city/22 highway/18 combined for rear-wheel drive models), as well as its shortcomings as a family crossover, it has proven spectacularly popular. Sales in 2014 were 76,906, a whopping 49 percent increase over 2013 when 51,625 left dealer showrooms. And January 2015 sales of just fewer than 7,000 were nearly double those of January 2014. If this trend continues that portends 2015 sales of nearly 85,000.

It has proven spectacularly popular.

If you are a dedicated—or even an occasional—off-roader then the 4Runner should be right up your alley with such standard equipment as skid plates, mud guards, hill-start assist, hill-descent control, and a dual-range transfer case. If you want additional standard off-road goodies opt for the Trail model that comes with a locking rear differential, selectable terrain modes, and crawl control. The Trail models are also eligible for the optional Kinetic Dynamic Suspension System that automatically disconnects the stabilizer bars in low-speed off-road situations to improve suspension articulation over rocks and ruts.

Performance is adequate from the 270 hp V6 engine measured at 7.6 seconds from 0-to-60 in 4-wheel drive configuration. Like many trucks, hitting the throttle from a standstill brings almost more noise than motivation, but the engine gets the job done. Towing capacity is only adequate at best considering the 278 lb-ft of torque available, rated at 4,700 pounds in both rear- and 4-wheel configurations.

We found the 4Runner’s road manners acceptable for a big truck, with a willingness to proceed in a straight line, but with little feedback from the steering wheel. And as you might expect, don’t get too frisky on the winding roads.

We heard more road noise intruding on the interior at highway speeds than we have come to expect in a 40 grand vehicle, but the cabin is comfortable, the controls well laid out and easy to use, and the gauges attractive and legible. We appreciated the large climate control knobs as well as the volume and tuning knobs for the radio, although pre-sets were embedded in the center screen. There are numerous storage cubbies, always a welcome feature.

Safety is well covered with a standard rearview camera, anti-lock brakes, stability and traction control and—on all 4-wheel drive models—an off-road traction control system known as A-Trac that helps keep you moving on slippery terrain by redirecting torque to the wheels that have traction.

The 4Runner is offered in four trim levels—SR5, Trail, TRD Pro and Limited—starting at $34,095 including destination charge for the rear-wheel drive SR5. The top-of-the-line Limited goes out the door for $44,505. Add $1,500 for a set of automatic running boards that will keep you happy getting in and out.

Our Trail Premium 4 X 4 test truck came with a handful of options including the Kinetic Dynamic Suspension System for a bottom line of $40,880.