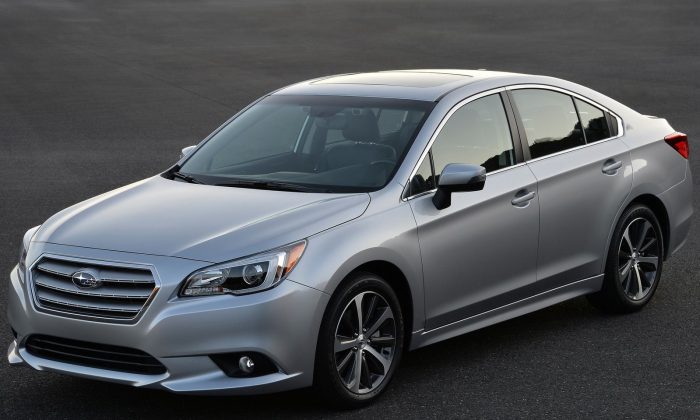 Despite hints of futuristic styling with the Legacy Concept last year, Subaru took a more conservative approach with the design of the new-for-2015 Legacy mid-sized sedan. While styling tweaks have given the new car an updated look, it still carries a strong resemblance to the 2014 edition. Likewise, Subaru elected to retain the same two-engine alignment it has used for several years.

Where the new Subaru shines is in the interior which has been endowed with a more upscale, refined feel, upgraded materials, and a quieter cabin. And the Legacy has a smoother more comfortable ride (although still on the firm side compared to segment sedans) than last year together with improved gas mileage from the carryover engines. And Legacy still has one big thing going for it—standard all-wheel drive; technology that is either optional or not available from competitors, offering the driving dynamics and amenities to hold its own against the segment’s most popular vehicles.

With the 2015 edition now in showrooms the new sedan will help Subaru gain a foothold in the huge, mid-sized sedan segment and be instrumental in Subaru’s continued record North American growth.

The new Legacy is attractive and well-proportioned. We like the sedan’s wedge-shaped stance highlighted by a slight flare of the fenders. Key to the sleeker, coupe-like profile is a new front fascia that combines the hexagonal grille and bumper into one smooth piece, and the windshield is more raked, pulled forward two inches at the base. The Legacy is like a big greenhouse with great sight lines in all directions.

Carryover engines include a 2.5-liter, horizontally opposed, four-cylinder making 175 horsepower and 174 pound-feet of torque and a 3.6-liter, 6-cylinder, “boxer” engine generating 256 horsepower and 247 pound-feet of torque. We were pleased with the performance of our test car, a 3.6R Limited. Although not as fast as several of the V-6 offerings in the segment, we found it more than adequate with published 0-to-60 times of around 7 seconds. Both engines are mated to Subaru’s “Lineartronic” continuously variable transmission (CVT) that is designed to mimic the shifts of a traditional transmission. Paddle shifters were included on our test car to move between the simulated gears.

Gas mileage has always been a bugaboo for the Legacy because of the all-wheel drive system’s extra weight, but with the 2015 Legacy, Subaru has managed to pull even with the competition in the mileage department. The EPA numbers for the 4-cylinder are 26 mpg city, 36 highway, and 30 combined. The six-cylinder is now rated at 20/29/23 on regular gas.

We found our 3.6R Limited test car to be surprisingly entertaining on our usual rural road blacktop “test track.” We determined it cornered with the best of the family sedans we’ve driven over the past couple of years. Part of the Subaru’s handling prowess comes courtesy of the all-wheel drive’s new “torque vectoring,” which is designed to improve cornering performance by modulating the flow of power between the inside and outside wheels.

Subaru has created a slightly higher driving position with supportive and comfortable front seats. Sightlines are outstanding, and gauges and controls are generally intuitive and easy to read. But we were not fond of radio controls that include pre-set buttons embedded in the navigation screen. One real standout was the navigation software, which we found the clearest and easiest to use of any we’ve encountered in recent times.

Subaru provides the usual safety equipment including rearview camera as standard across the lineup. Optional is Subaru’s outstanding EyeSight system operated by two outward-facing cameras mounted high up on the windshield on either side of the rearview mirror. With its magic “eye” it adjusts the adaptive cruise control, alerts the driver if the car wanders out of its lane, and applies braking to avoid or minimize a collision. It works really well if the difference of speed in pre-collision mode is less than 20 mph.

Granted, it’s part of a near $2,990 option package, but well worth the outlay, especially when considering that it partners with a pre-collision throttle management system along with navigation, a high-end audio system, lane-departure warning, and other cutting-edge features that come in the package.