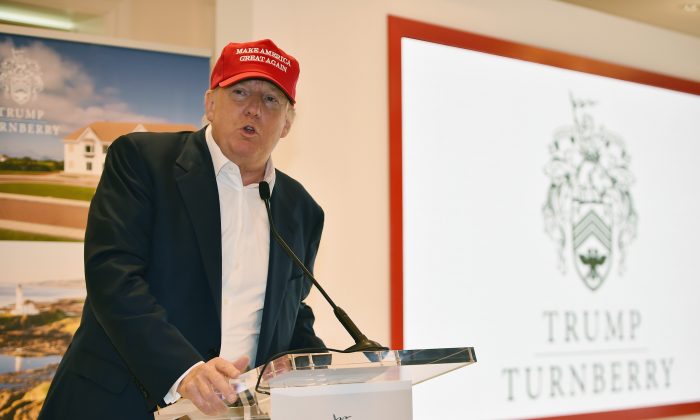 Kohler, WI—To say Donald Trump loves attention is the equivalent of saying fish love water. The issue for the major golf associations—PGA of America, PGA Tour, LPGA Tour, R&A, etc, etc—is that The Donald has a clear tendency to assert his personality above all other elements. And that is—or it should be—a major point of concern since the aforementioned key groups do not want to be seen as a secondary news story to the insatiable appetite for attention Trump craves and feeds upon.

Trump’s emergence as a top tier candidate for the Republican nomination for President was not anywhere near as critical as the various comments attributed to him on volatile subjects such as immigration—most notably, between Mexico and the USA. To the credit of the major golf groups there was universal condemnation of his strident comments but even such a quick retort didn’t spare the PGA of America the embarrassment in having to move its Grand Slam of Golf event—originally slated for Trump National Los Angeles—while looking for another location.

Over the last several years Trump has used his love of golf as a platform in widening his overall identity and brand—not just here in America but internationally as well—with 17 golf properties total, 12 in America. An avid golfer, Trump has been in the front lines through the creation of new courses, the upgrading of others and the desire to push his involvement to the highest rung with golf’s biggest events associated with him.

That “association” carries high risks for the various major golf groups. The longer Trump remains in the political discussions as a candidate, the spillover can mean serious questions for these golf groups in why they continue their association with The Donald.

Following his comments on immigration, the City of New York—through the actions of Mayor Bill DeBlasio—initiated a review of all contracts that exist between Trump and the Big Apple. Among the items on the review list was the management contract Trump has with the city’s newest public course—Ferry Point.

This week’s PGA Championship at Whistling Straits will likely push the Trump name way to the side—for the moment. The PGA of America brain trust has worked closely with Trump—to the consternation of a few key internal leaders—and Trump has gained the very two things he has long craved—credibility and standing.

The process Trump has followed has been a rather long and winding road. Unlike much of the golf universe which continues to go through a major slump, it has been Trump pushing ahead on the golf course development side of things.

Among The Donald’s major successes have been the purchase of Doral—the Miami-based location that has been hosting PGA Tour events since the early 60’s and is the annual site for a WGC event each March. Trump hired one of the most noted architects in the industry—Gil Hanse—and had the famed “Blue Monster” course completely renovated. Nothing gives Trump more satisfaction than knowing that during the trophy presentation his face is prominently located next to the winner of the event along with the Commissioner of the PGA Tour—Tim Finchem.

Trump has developed relationships with the USGA and has already hosted a minor national championship in the boys and girls event in ’09. Given its success, the USGA signed a deal in which Trump Bedminster (NJ) will serve as host facility for the ’17 Women’s Open. It’s clear to see Trump has eyes for the ultimate prize the Men’s Open but the USGA has been rather coy in offering anything beyond the ’17 event.

Like a capable businessman, Trump has seen opportunities to purchase key properties. Two of the more notable were overseas—the first at Doonbeg in west Ireland. The Greg Norman designed course had been struggling and Trump swooped in and took total ownership early in ’14. Then the biggest catch came shortly thereafter: Trump becoming the sole owner of Turnberry in Scotland—a four-time venue for The Open Championship. Just a few weeks ago, Turnberry hosted the Women’s British Open and true to form before the event began, Trump flew to the property and made a grand entrance with his helicopter setting down on the property. Given Trump’s desire to keep the spotlight squarely on himself he held a press conference that day which only served to push the actual event deep into the shadows.

The R&A has not announced if or when Turnberry will host its 5th Open Championship but clearly the signals sent by Trump at the Women’s Open is a concern that needs to be considered.

The PGA of America had best see the writing on the wall. Unfortunately, the association signed a deal with Trump for him to use his Bedminster facility as host for the ’22 PGA Championship—the first men’s major to be held at a Trump-owned property.

It’s quite comical to see the PGA of America quickly and without hesitation dump its former President Ted Bishop late last year for ill-advised comments made via social media before his term as President concluded. Should Trump state any more controversial verbal salvos during his Presidential bid the heat will clearly go up in a big time way with the various golf associations that have seen fit to have their events on his properties.

The PGA of America has long sought to have its marquee event—the PGA Championship—be seen as an equal to the other three majors. No question the event has come a long way and there are possible plans for possibly taking the event outside the USA which could help it gain more visibility and worldwide stature.

But Chief Executive Officer Pete Bavacqua had best watch the ever-changing landscape now that Trump is focusing on raising his profile in a Presidential campaign. The interests for Trump remain squarely on pushing his name higher and higher. The PGA of America must seriously contemplate if its clear interests are served with or without Trump. As Bette Davis said classically in the movie, “All About Eve,”—”Fasten your seatbelts it’s going to be a bumpy night.” For the various major golf associations, the seat belt had best be tightened to the maximum.