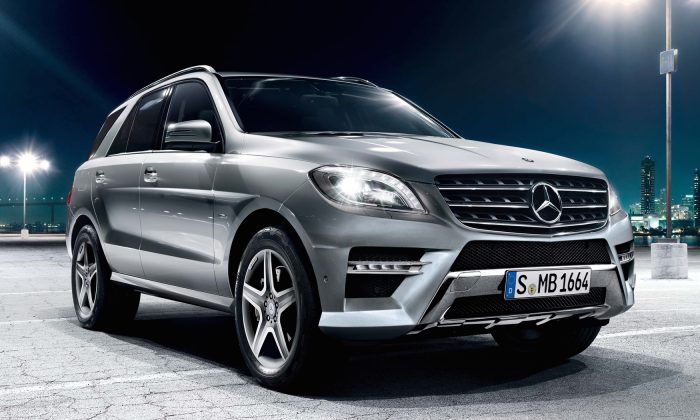 Although it’s likely some people will be impressed as you pilot around a Benz SUV; in truth, you will be much more dazzled by the Mercedes-Benz M-Class from behind the wheel than those gawking at it from the curb will be. This is particularly true if it’s the highly contented ML400 like the one in which I recently cruised the streets of South Florida.

Car is king in South Florida where you are as likely to pull up next to a Benz at a red light as you are a pickup truck in San Antonio. I wasn’t surprised when no one gave it a second glance for the long weekend I was there. But, from my driver’s-seat perspective, I was smitten.

ML400 was quick and, for its size, quite nimble.

Translating engine output into relentless momentum, no matter the engine, is a 7-speed, driver-shiftable automatic transmission. Optional on the rear-wheel-drive ML350, but standard on all other trims is all-wheel drive or 4Matic in Benz-speak. Not engineered for serious off-roading, 4Matic provides extra traction in foul weather, mud and dirt.

Be prepared to spend a minute or two in quiet awe of the elegance, craftsmanship and gorgeous styling surrounding you the first time you slip behind the wheel. The symmetry, the logical flow of the lines, and just the right combination of leather, wood and brushed metallic surfaces collude to create an almost decadent level of luxury.

Furnished for five, the M-Class leaves a third-row seat to its larger GL stablemate. The front bucket seats provide a rich, men’s club-like experience. Three fit comfortably across the second-row seat that provides generous legroom as well. Capable of carrying nearly twice the cargo behind its rear seat than can be crammed into the trunk of a full-size Ford Taurus, the M is as well suited for a family trip across country as it is an afternoon shopping session at the mall.

My test M-Class was brimming with optional features to the tune of about $15,000. These included goodies, such as a power panoramic roof, massaging front seats, adjustable air suspension and so on.

One unique safety feature packed into every M-Class is Attention Assist that monitors 70 different areas of driving behavior to detect when a driver may be getting drowsy. Using both visual and audible signals, it warns the driver, as well as, I suppose, anyone else in the vehicle who might be interested.

My ML400 was quick and, for its size, quite nimble. Ride quality was outstanding. As a driver, I appreciated the nearly uninterrupted 360-degree view and the general feeling of command the pilot’s seat offers. If your pockets are deep enough, the M-Class delivers top-notch performance and utility in a midsize SUV.