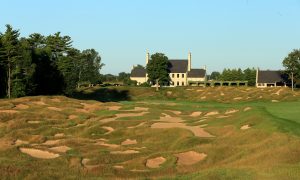 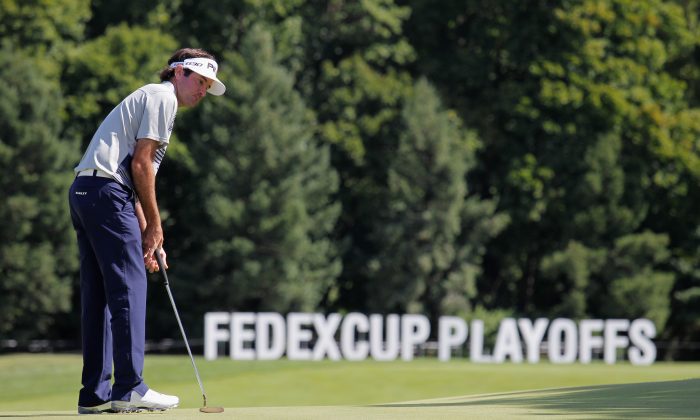 Bubba Watson watches his birdie putt on the 18th hole during the first round of The Barclays at Plainfield Country Club on August 27 in Edison, New Jersey. (Hunter Martin/Getty Images)
Golf

Edison, NJ—If physical talent were the only ingredient needed to be the world’s best golfer Bubba Watson would sit atop the pyramid of talented players teeing it up this week at The Barclays—the first event which determines the ultimate Fed-ExCup Playoffs champion.

There’s no questioning the innate dexterity the 36-year-old has with his golf clubs. Watson is more than comfortable in creating shot few tour professionals would ever contemplate attempting in tournament situations.

For the first 14 holes at the host site Plainfield CC, Watson displayed a range of uncanny successes: hitting driver full bore and then managing approach shots in whatever direction or height he decided upon. Unfortunately, what could have been a solo lead round of 63, had him limp home with two bogeys on the final five holes. Nonetheless, his five-under-par 65 dropped him into a tie for the lead with three others—Spencer Levin, Tony Finau and Camilo Villegas.

As the number-three player starting the FedEx Cup Playoffs, Watson was paired with the new world number-one player Jordan Spieth and the recently crowned PGA Champion Jason Day. Spieth and Day are respectively one and two in the FedEx Cup point positions.

Playing world class golf goes far beyond physical skills in hitting a golf ball. The mental dimension is ultimately the final element separating the elite players. The legendary Jack Nicklaus was fond in saying that there were a number of players on the PGA Tour when he competed that excelled in hitting the ball—even better than the Golden Bear. But none were able to make the correct mental decisions during the height of critical tournaments than Jack himself. It is the mental side which has caused Watson to languish—instead of shine. Watson has shown episodes in which he has allowed his mind to wander—to lose focus shown by others he regularly competes against.

Ranked as the fourth best golfer in the world, there’s little doubt when the Florida native is zoned in to the task at-hand, he is fully capable in producing a stunning array of shots. The most noted coming in the ’12 Masters at Augusta National when Watson hooked a wedge shot from deep right of the 10th fairway off pine straw to claim his first green jacket.

Earlier this summer, Bubba earned his eighth PGA Tour triumph with a return win at The Traveler’s just outside of Hartford—where he won his first PGA title.

Even with all these successes, the mental side of the game—and how Bubba has handled such matters—has proven to be vexing. At times Watson has demonstrated a prickly side—where no matter how things have progressed during a round—it is very possible for Bubba to overreact to outside forces. The inability to block out such interferences is something he recognizes and hopes to put behind him.

“You know, I had some issues growing up where I was very angry at the world and at the golf, and so I’ve tried to get better at that,” said Watson after his first round concluded. “And so over the past few years, I’ve grown up, I guess you’d say, and my thinking, my processes, either I’m getting better as a person or just tired of hitting bad shots on the golf course. So I’m thinking better.”

Watson’s supreme physical skills leaves him avenues few other golfers can match. Beyond the prodigious distances he can propel his tee ball with his pink-color-head driver, Watson relishes working the ball from one side to the other and will do even under the most glaring of pressures during a competition.

Behind the Curtain at Whistling Straits

To Watson’s considerable credit he is now more open to comments on just how he can play the stellar level of golf beyond limited instances. “I’m taking off some tournaments that I normally don’t take off just to have some more energy. We always talk about energy,” said Watson. “Tiger’s (Woods) talked about it. Phil’s (Mickelson) talked about it. These young guns have talked about it—Jason Day and Jordan Spieth have talked about it. That’s really when you look at the schedule. How you are going to play your best when you’re out here—you have to have rest.

The first round of The Barclays featured the number one, two and three players in the FedEx Cup standings paired together. Spieth, the new world number one, scored an uncharacteristic four-over-par 74—which included a major meltdown on his inner half of holes, the actual front nine of the course—with a six-over-par 40 total. Should Spieth, the current Masters and U.S. Open Champion, fail to finish in the top 60, his tenure at the top of the world rankings will quickly end for the moment and mean the return of former number one Rory McIlroy—who is skipping this week’s event. Spieth has not missed a cut in three months and only failed to advance to weekend play twice in 21 starts so far this season.

Day, the reigning PGA Champion, fired a two-under-par 68 which was mainly uneventful—save for the few times the third-ranked player in the world grabbed his back because of stiffness. Day had sought treatment the day prior to the start of the championship and opted not to play in the pro-am event. For the talented Aussie, his first round in this year’s Barclays marked the first time he had played Plainfield.

Watson is well aware players do not win events simply because of fine play in the first round. He was quite emphatic when asked would he think about his round later in the evening. His answer was simple and to the point—”No.”

Bubba Watson—like Dustin Johnson—possess immense golf skills. But, thus far, the two long hitters have failed to clearly separate themselves from the other competitors. Flashes of brilliance have been shown, but sustaining that quality has been elusive to date.

Golf is more mind game than many might imagine. Watson has depended solely on his physical skills and should he harness his focus and allow situations which have caused him grief in the past to simply roll off his back—the wherewithal to claim even more significant tournaments cannot be discounted. What has proven to be difficult to achieve in the past may be nothing more than elementary Watson.