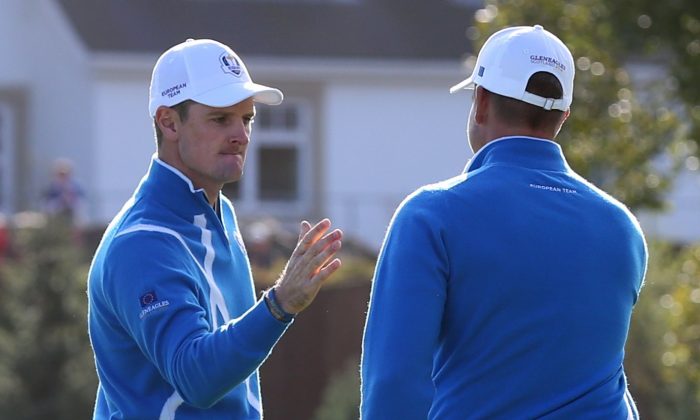 M. James Ward
View profile
Follow
biggersmaller
Print
AUCHTERARDER, Scotland—If there is one word that truly encapsulates the bi-annual Ryder Cup Matches, and frankly in just about any sport, it is the word momentum. Individuals and teams that have it feel the rush of success — the wind blowing behind their back — the feeling of invincibility. However, just as suddenly, momentum can be fleeting — the winds turn back into you — the breaks go another way — suddenly the climb that was so easy going downhill becomes a demanding maddening uphill trek.
After securing a one-point lead through the four morning fourball matches — Team USA seemed to have major momentum. But just as suddenly as momentum propelled the American squad in the AM — it was the tenacity and talent of Team Euro which roared back in a determined manner. Claiming 3 1/2 of the 4 points available during the four foursomes matches, Team Euro leaves Gleneagles with a 5-3 lead and an air of considerable doubt for an American squad that went into the afternoon session feeling confident. Now concern becomes the buzzword for day two on Saturday.
The American team had been in the lead through the first day of matches since the 2006 event at The K Club in Ireland. Coming from behind may prove daunting — as the USA has only rallied one time in the last 27 years when trailing by two or more points after Day One. With 20 matches still to play the Euros need only win nine (9) points to secure the Ryder Cup for another two years.
Captain Tom Watson for Team USA put up a brave face afterwards saying a two-point deficit is not much but the fragile American side will need to come out in a big time manner in Saturday’s fourball matches — regaining the momentum and putting some serious doubt into a Euro squad that stabilized itself in a big time way in Friday’s PM matches.
Watson took some heat for benching the tandem of Patrick Reed and Jordan Spieth for the afternoon session after they dispensed rather quickly the Euro tandem of Ian Poulter and Stephen Gallacher 5&4. Coming into the 2014 matches Poulter carried an 80% win rate and was seen by the American squad as the main target given Poulter’s emotional play at Medinah two years ago when Team Euro overcame a four point deficit on the final day to win again on American soil.
Going with Keegan Bradley and Phil Mickelson in the afternoon proved a poor choice as Mickelson showed fatigue and made several key shot miscues. Whether Reed and Spieth would have fared differently is now just armchair quarterbacking. Watson was quick to counter by saying after the first day of play, “It’s 5-3. That’s two matches,” the eight-time major champion said. “You win two matches — you’re back to even. You win four — you’re up by two. That’s the way this Ryder Cup works, and that’s the realty of it. I have to say, I’m good with it.”
Credit the Euros with inspired play when their top rated duo of Sergio Garcia and the world’s number one player Rory McIlroy played superb shots at the end of their match against Jimmy Walker and Rickie Fowler to earn a hard fought halve after Fowler’s 15-foot for birdie on the final hole to win the match was never remotely close to going into the hole. An American win that looked imminent, never could be finalized.
Day two will set the stage for the 12 singles matches that will come on Sunday. The American squad will need to dig down deep because failure on Saturday could well mean a hole so deep they cannot overcome. That has been the predictable story line for Team USA. The last American victory on Euro soil came in 1993 at The Belfry in England when Watson was team Captain. For that to happen again it will take a major effort from all the key players and Watson will need to choose wisely which players stay in the line-up and which ones need to watch from the sidelines.
Momentum has no set home — no preferred side. Team USA had it through the morning on Friday but squandered it. Is the resolve there? Can an American squad that has been listed as two-to-one underdog show more than what all the experts seem to believe? We shall soon find out.
Saturday morning Four-Ball Matches: