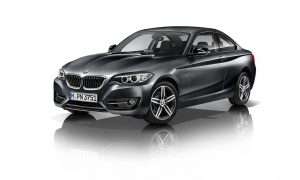 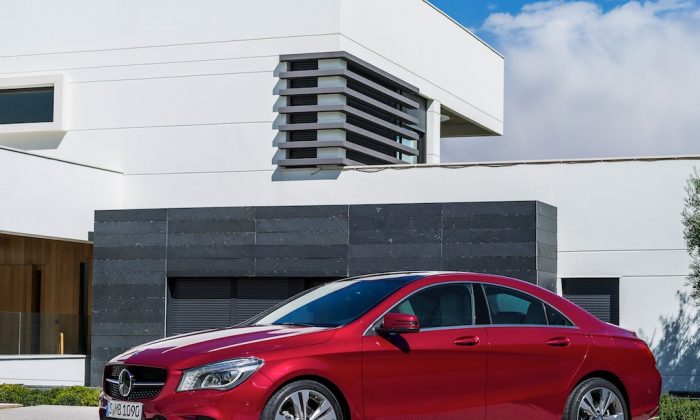 Great Value for a price starting at $30,000 - Mercedes' cheapest model CLA delivers a lot of beauty and power in a compelling package. (Getty Images)
Autos

2014 Mercedes CLA Testdrive: Cheap Beauty With a Lot of Virtues

In fact, this lowest-priced Mercedes presents a competitive alternative to the 2014 BMW 3-Series and 2015 Audi A3 sedans.

Price isn’t the only attraction of the CLA.

The CLA’s federal government fuel efficiency ratings of 26 miles per gallon in city driving and 38 mpg on the highway are higher than those of the 3-Series and A3.

Additionally, the CLA comes standard with a fuel-saving stop-start system that automatically shuts off the engine during most stops when the engine usually would idle, say, at stoplights. The car starts up on its own when it’s time to move.

Yet, despite the fuel-thrifty engineering, the CLA’s 208-horsepower, turbo four cylinder packs a punch and can push passengers’ backs into the seats during acceleration.

This four-door Mercedes looks sleek and sporty on the outside, with a coupe-like profile and exterior styling that borrows heavily from the Mercedes CLS “coupe-style” sedan that starts at $73,025.

The CLA interior is nicely crafted, too, with well-placed controls and properly stitched seat and center console trim.

Even Mercedes’ MB-Tex faux leather seat material looks and feels good in the CLA and can pass for real the real thing while saving the buyer the $1,500 option price for leather.

A Mercedes for the Money-Conscious, Yet Reliability From New Factory to Be Seen

Best of all, perhaps, for money-conscious car buyers pining to drive a Mercedes, the CLA can be configured with extras such as rearview camera, navigation system, heated front seats and harmon/kardon surround sound system while the price stays below $36,000.

There are, however, no reliability ratings yet for the CLA, which is built in a new factory in Hungary.

And rear seat room in the CLA can feel cramped.

The CLA’s starting manufacturer’s suggested retail price, including destination charge, of $30,825 is $5,900 less than that for the previous Mercedes price leader, the C-Class. A 2014 CLA with all-wheel drive starts at $32,825.

Meantime, the starting retail price, including destination charge, for a front-wheel drive, 2015 Audi A3 sedan is $30,795 with 170-horsepower, turbocharged four cylinder and six-speed, dual-clutch transmission. A 2015 A3 sedan with larger turbo four cylinder that develops 220 horsepower has a starting MSRP, including destination charge, of $33,795. Note this upper level A3 comes standard with all-wheel drive.

Another competitor to the CLA — the rear-wheel drive, 2014 BMW 320i — has a starting retail price of $33,675 with a twin-turbocharged four cylinder generating 180 horsepower. This model comes standard with an eight-speed automatic transmission.

The base price notwithstanding, it can be easy for CLA buyers to drive away from dealerships with CLAs priced above $40,000. The test CLA250, for example, topped out at $43,245 because it had $12,420 in options on it. And, it’s worth noting, even at that price, the CLA tester did not have leather seats.

But careful shopping and configuring can net buyers a CLA250 at a more modest $35,495 and with a good amount of amenities.

For example, a 2014 CLA250 can add a rearview camera as part of a $2,370 multimedia package that includes navigation system, 10-gigabyte music register and 7-inch display screen. A $2,300 premium package is required, too, according to the Mercedes consumer website. The premium package adds dual-zone, automatic climate control, heated front seats and harmon/kardon surround sound system among other things and is required when the multimedia package is bought.

The smoothly delivered, responsive power from the 2-liter, turbo, direct injection four cylinder in the CLA250 comes after a small lag when the gas pedal is pushed.

According to Mercedes, 0 to 60 miles an hour takes 6.9 seconds. This isn’t sports car territory, but the fact the 258 foot-pounds of peak torque in the CLA comes on at a low 1,250 rpm and carries to 4,000 rpm means this power is tapped quickly and during many driving situations.

The CLA’s seven-speed, dual-clutch, automatic transmission moved through the gears in sporting fashion, and engine sounds were strong and confident.

The test CLA, driven spiritedly, averaged 28 mpg, which was lower than the government’s estimate of 30 mpg. Alas, the test car mileage translated into a mere 396-mile driving range. The CLA fuel tank holds only 13.2 gallons. Note that premium fuel is required, so a fillup can cost $52 at today’s prices.

Stop-Start Takes a Cough or Two

Another note: The transitions were rough when the car’s engine would start up during stop-start operations. While the car went pleasingly silent when stopped at stoplights, the tester would rumble to life and almost sound like it was coughing as the engine resumed when it was time for the car to move again. Other cars have stop-start operations that manage the transition more pleasantly.

The test CLA was nimble in its handling, though the ride was quite firm, thanks to an optional sport suspension.

Buyers in warm climes may want to think hard about getting a panorama roof. In the test car, heat on 90-degree days radiated through the glass and through the black fabric shade to make the car interior quite hot.

The CLA back seat is best for only two people and not necessarily 6-footers. Rear-seat headroom of 35.4 inches is less than that in the A3 and rear-seat legroom is just 27.1 inches.