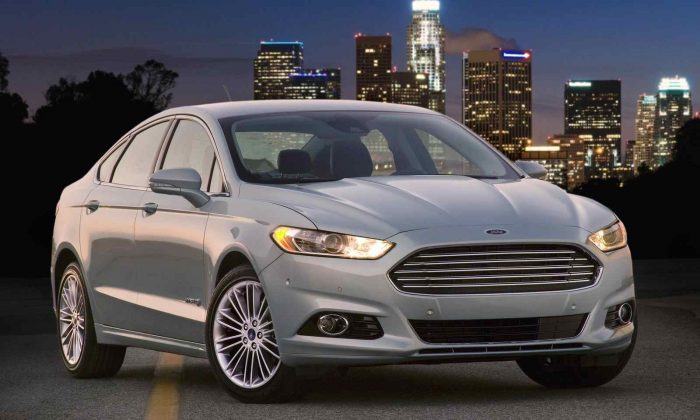 Fusion’s appealing styling has been well documented over the past year, and its new-found sales success shows that Ford designers took the mid-sized sedan in the right direction. Its Aston Martin-derived grille and long, lean body wrapped in curvaceous sheet metal sets a new standard for the segment.

But the Fusion has more going for it than its outward appearance. From its unique engine choices to its unusually sporty driving dynamics to its quiet, tasteful cabin to its long list of standard and optional equipment, the Fusion hits the mark.

Ford has given customers some intriguing engines, but perhaps the standout drivetrain is found in the new Fusion hybrid featuring an all-new 2.0-litre four-cylinder engine. The electric motor is fed by a new trunk-mounted lithium-ion battery pack, (replacing a nickel-metal-hydride pack) now rated at 188 total horsepower. The hybrid performs much like the standard four-cylinder engines in today’s mid-sized cars with plenty of power to get things such as merging and passing done without drama. The engine is mated to a new electronically controlled continuously variable transmission.

Measured at about 8.5 seconds from 0 to 60 mph, the Fusion successfully gets the job done with excellent gas mileage and far superior driving dynamics. In fact the new Fusion hybrid comes closer to driving like a conventional car than any hybrid we’ve experienced. We found the car’s handling more sports-sedan-like than hybrid-like. While electric power steering is usually lacking in road feel, we discovered the Fusion’s steering is exceptionally communicative. One downside, as with nearly all hybrids with regenerative braking, we found the brakes touchy, hard to modulate at first. But once you get used to the car, it’s not much of an issue.

There has been much conversation about the Fusion’s actual gas mileage compared to its posted numbers. We did not hit the magic 47, but we don’t drive for gas mileage, with consistently fast starts from stoplights and highway driving as fast as we dare without catching a patrolman’s attention. Even with that kind of activity, we managed to push the mpg to 40 before giving the car back.

What we were able to do near home was coast at the posted 25 mph speed limit for a bit more than a-half mile on city streets on battery power alone. We could have continued solely using the battery, but we didn’t want to annoy fellow drivers with our sedate pace. That’s a feat we haven’t been able to accomplish before in a non-plug-in hybrid.

The Fusion’s interior is roomy with a distinctly up-market look that includes high-quality materials. The centre stack and instrument panel have been beautiful restructured. The seats are comfortable and supportive both front and back. Rear-seat passengers have excellent leg room, and trunk space—traditionally limited in a hybrid because of the battery pack—is a useable 12 cubic feet. The good news here is that the seatbacks fold for additional storage space.

The all-new Fusion offers the latest iteration of Ford’s SYNC communications and entertainment system, which enables voice-activated communication through a driver’s mobile phone and interaction with the car’s audio system. Fusion also offers the latest version of MyFord Touch that allows drivers to interact with vehicle systems through voice control, a touch screen tap or a conventional button. While these systems admittedly are on the cutting edge of communication technology, we still find them difficult to use, especially when driving.

Like all hybrids, the Fusion is a bit pricey and you will have to determine—based on annual miles driven and projected length of ownership—if it is worth the extra cost over a conventional sedan.

In the U.S. the Fusion Hybrid comes in two trim levels—the SE and Titanium—while in Canada only the one is available. The Canadian Fusion Hybrid is roughly equivalent to the SE Hybrid and carries a sticker price of $29,999, which is a $5,500 premium over the regular SE. Standard equipment is generous and includes dual-zone climate control, intermittent wipers, tilt and telescoping steering wheel, satellite radio, SYNC with MyFord (Not the same as MyFord Touch) infotainment system, and full power accessories.