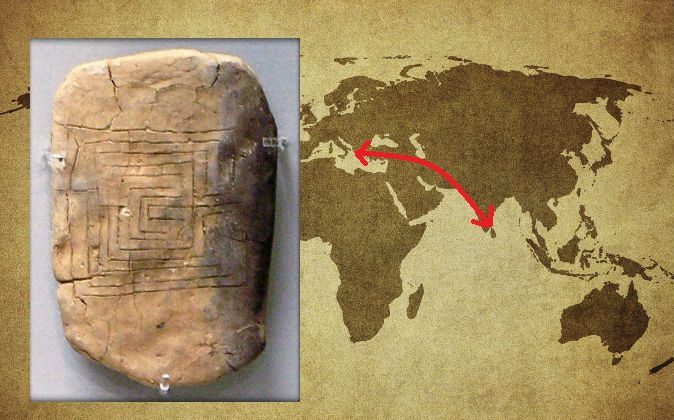 2,000-Year-Old Labyrinth Uncovered in India Shows Same Pattern as Greek Maze From 1200 BC

Archaeologists have uncovered a labyrinth in India that dates back 2,000 years and has a pattern similar to those found on a clay tablet found at Pylos, Greece, from 1200 B.C.

The square labyrinth, which measures 56 feet squared (17 meters squared), is in Gedimedu, a village in Tamil Nadu, southern India. It is being excavated by researchers from the Verarajendran Archaeological and Historical Research Centre, according to Times of India. The site is on an ancient trade route along the east coast.

Locals have built a temple over the labyrinth, but archaeologists intend to ask them to remove it to allow further excavation and study.

S. Ravikumar, chief of the research team, told Times of India: “The labyrinth has one pathway which leads inexorably to the goal from the point of entry. One has to walk through the right path to reach the goal. It is believed that the person who walks through the seven routes correctly will fulfill his wishes.”

Ravikumar said: “The inner walking space of this labyrinth varies from 2.6 feet (79 centimeters) to 3.6 feet (1.09 meters). The entrance is towards the east. Its old name is Seven Round Fort. The pattern is the same [as the one] … we see on the clay tablet from Pylos in Greece, one of the oldest labyrinths in clay.”

The tablet survived a fire at the Mycenaean palace at Pylos around 1200 B.C. It is a very early example of the labyrinth symbol, making it an important artifact although it is seemingly a mere doodle by a scribe whose main purpose was to record deliveries of goats on the front of the tablet.

The Greeks, under Alexander the Great, invaded India for the first time several centuries after this tablet was created. The labyrinth symbol had spread from Greece to Egypt and other lands over the centuries. For example, a 7th century B.C. Etruscan wine jar from Tragliatella, Italy, features a depiction of soldiers running from a labyrinth. The word Troy is inscribed on the jar.

The Pylos tablet also has connections with Troy. It was found at the traditional home of King Nestor, who assisted in the siege and downfall of Troy. This downfall is traditionally dated to about 1250 B.C.

The symbolism and meaning of labyrinths in the ancient world are complex and multifarious. In some Asian cultures, the labyrinth was related to “the escape from samsara and the laws of karma,” according to An Illustrated Encyclopedia of Traditional Symbols by J.C. Cooper. Samsara refers to the cycle of birth, death, and reincarnation in the human world. Escaping from samsara would mean attaining enlightenment and reaching heaven.

Labyrinths also share symbolism with the enchanted forest, the course of the sun, paradise regained, attaining realization after an ordeal or trial, a rite of passage from the profane to the sacred and “the journey of life through the difficulties and illusions of the world to the center as enlightenment or heaven,” Cooper writes. “Going into a labyrinth symbolized death, coming out is rebirth.”

Labyrinth designs on homes were often meant to do magic—to confuse and prevent the entry of evil spirits or other hostile powers.