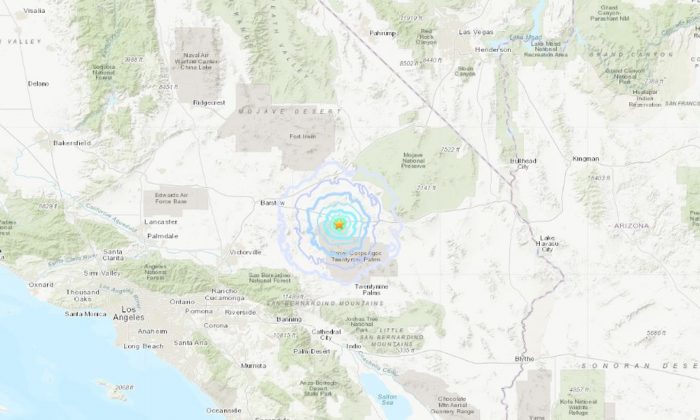 An earthquake swarm hit California on Feb. 7. (USGS)
US News

2 Earthquake Swarms Hit Northern and Southern California in a Week

A swarm of earthquakes hit a remote area of San Bernardino County, California, according to the U.S. Geological Survey (USGS).

The quake, namely, was centered around Twentynine Palms near a Marine Corps base.

The strongest earthquake was a 4.0 magnitude quake that struck at 8:41 a.m. on Feb. 7, centered about 7 miles from Ludlow, said the USGS.

By 9 a.m., about nine earthquakes hit the area, CBS Los Angeles reported. They ranged from 2.1 to 4.0 in magnitude on the Richter scale.

It’s unclear if there was any damage done in the area.

KTLA reported the swarm of quakes occurred “just north” of the Twentynine Palms Marines base.

The strongest Feb. 7 quake was felt as far away as Laughlin, Nevada, which is about 90 miles away from the epicenter. The quake was also felt in Los Angeles, located 125 miles away, CBS LA reported.

It comes a few days after another earthquake swarm occurred in Humboldt County, located in Northern California, in about a week.

The largest of those quakes registered as a 4.5 on the Richter scale, happening on Sunday, Feb. 3, reported the Times-Standard.

There are currently no tsunami warnings nor watches in effect, according to the National Oceanic and Atmospheric Administration.

She added: “We recommend that residents in remote areas maintain supplies for more than two weeks. Following a countywide disaster, rural communities may be inaccessible while roads and bridges are inspected and repaired. Following a major earthquake, we can expect a long series of aftershocks that can cause additional damages and require multiple inspections.”

Lori Dengler, the emeritus professor of geology at Humboldt State University, said the region is due for a larger earthquake that can cause damage.

The Hayward Fault is overdue for a big shake. Statewide, there is a 75 percent chance of an earthquake larger than a magnitude of 7.0 or larger occurring in the next 30 years. The publicly-managed California… https://t.co/qvg9F7b4eJ

“What we know is we have had a long, an unusually long quiet spell on the North Coast, so if you look at the earthquake activity we haven’t had a whole lot since 2010,” Dengler said. “There was one earthquake offshore that wasn’t felt strongly and Jan. 9, 2010, was our last strong earthquake. If you look at all the earthquakes since the turn of the century, on average we have an earthquake that will cause damage every seven years.”

There were no tsunami warnings after the Northern California swarm.

Earthquake swarms are defined as events where a local area has many earthquakes hitting in a relatively short period of time, but the length varies. It could last hours, days, or even weeks.

“When people ask me what do those earthquakes mean, most likely the 4.5 is the largest we will get in that sequence,” Dengler said. She added, “Would I be surprised with a (magnitude) 5 or 6? No, I would not be surprised and we should take this as a reminder we live in earthquake country. Yes, we will have a damaging earthquake and we are one day closer to that event today than we were yesterday.”