Lion King Cast Member: Shen Yun ‘So Intriguing, It Was Beyond!’ 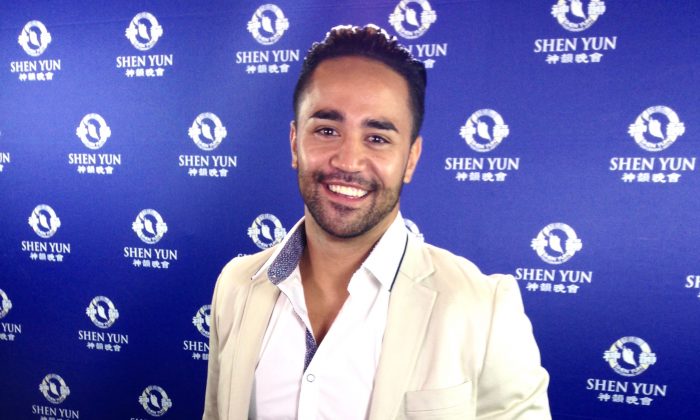 SYDNEY, Australia—Graeme Isaako, one of the cast members of Australia’s Lion King, found a lot to like about Shen Yun Performing Arts World Company. He and his wife were at the first of a seven-show-run at Sydney’s Lyric Theatre on Tuesday evening, March 8.

“Shen Yun is like nothing I have ever seen before,” Mr. Isaako said.

“They bring class with them, authenticity, something very different and real.”

“I genuinely love that it’s real stories of China, of its origins,” Mr. Isaako said.

Shen Yun specialises in performing classical Chinese dance, a complete system of dance according to the company’s website, that “has a long history of thousands of years … soaking up profound wisdom from every era and dynasty.”

Recognised for its incredible flips and spins, and its gentle elegance, classical Chinese dance is also one of the most rigorous and expressive art forms in the world.

Mr. Isaako commented on the quality of Shen Yun’s dance performances and noted that it takes years of training to achieve that level of skill.

The males were strong, the females are just elegant. I was so uplifted.
— Graeme Isaako

“Technically, the dancing was beyond measure, it was phenomenal.

“The males were strong, the females are just elegant. I was so uplifted. It was perfect. … I’m blown away, I seriously am blown away.”

He referred to the dance story “Handkerchiefs,” where a group of young ladies, dancing with pink handkerchiefs, celebrate against a background of fireworks.

“The whole time I was on the edge of my seat, and they would be just flipping upside down, catch, (twirling handkerchiefs) in rhythmic gymnastics-style. It was just so different.”

He said there was a “togetherness” about the Shen Yun dance formations.

“It was very communal … very together and unified, the break-off and they come back together, but then out of no-where there would be a whole scene of comedy and they’re lifting each other up and they’re acting. I felt such a sense of togetherness. That’s what I learned from the culture itself.”

He also learned of a spiritual side to Chinese culture that he had never seen before.

“I guess my eyes were opened to why they are and who they are. It carries through the music, carries through their poise and the way they present themselves. Even the show host at the end of every [scene]. The way she left the stage. It was so intriguing, it was beyond!”

Mr. Isaako said he was of Maori heritage and could relate to Shen Yun using the performing arts to revive China’s 5,000 years of cultural heritage.

“In my (Maori) culture, we say “whakapapa.” It’s their genealogy, it’s everyone that’s gone before them,” he said. “Basically, the people on stage today are who they are because of their forefathers, and they’re bringing that to the stage. That’s what I felt.”

Mr. Isaako said his sister and grandmother had seen Shen Yun in New Zealand and also loved it.

“My Nana’s half Chinese,” he explained. “I feel so renewed. It was powerful. It was really cool.”