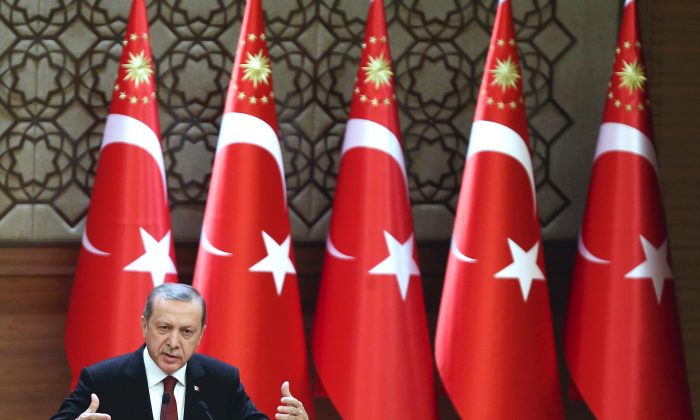 ANKARA, Turkey—Turkish police on Friday detained 18 academics who were among more than 1,000 scholars who signed a declaration denouncing military operations against Kurdish rebels in southeastern Turkey, the state-run Anadolu Agency reported. The move deepens concerns about freedom of expression under President Recep Tayyip Erdogan’s rule.

Prosecutors have launched investigations into the academics on possible charges of insulting the state and engaging in “terrorist propaganda” on behalf of the outlawed Kurdistan Workers’ Party, or PKK. The move came after Erdogan severely criticized the signatories, including linguist Noam Chomsky, and called on the judiciary to act against the “treachery.”

Erdogan said the academicians’ declaration was biased against the state, used the same language used by “terrorists” and did not speak out against the rebel group’s violence. On Thursday, Kurdish rebels detonated a car bomb at a police station in southeastern Turkey, then attacked it with rocket launchers and firearms. Six people were killed, including three children, authorities said.

Erdogan on Friday, prayed at Istanbul’s Blue Mosque and walked to the nearby site of a suicide bomb attack Tuesday that was blamed on the Islamic State group and killed 10 German tourists. He also renewed his attacks against the scholars.

“Just because they have titles such as professor, doctor in front of their names does not make them enlightened. These are dark people,” Erdogan said. “They are villain and vile because those who side with the villain are villain themselves.”

In the declaration, more than 1,000 academics from Turkey and abroad said they refused to be “a party to the crime” and called on the government to halt what they said was a “massacre.”

The declaration was referring to military operations against Kurdish militants in neighborhoods and towns in Turkey’s mainly Kurdish southeast where the government has imposed extended curfews. Those militants, who are linked to the PKK, have mounted barricades, dug trenches and set up explosives to keep authorities away. The operations have resulted in more than 100 civilian casualties and displaced thousands, human rights groups say.

The academics also called for the resumption of peace efforts with the rebels.

Anadolu said 15 academics from Kocaeli University in northwestern Turkey and three from Uludag University in the neighboring province of Bursa were detained for questioning on Friday. Police were acting in line with probes launched by prosecutors in Kocaeli and Bursa. Several other universities instigated probes into faculty members who also signed the declaration, according to Anadolu, in moves that could lead to dismissals. The Dogan news agency reported Thursday that Duzce University in northwestern Turkey fired a sociology lecturer for signing the declaration.

The United States expressed concern over the proceedings against the scholars, saying all citizens should be free to express controversial or unpopular views.

The PKK, considered a terrorist organization by Turkey and its western allies, has waged a more than 30-year separatist battle in southeastern Turkey. The conflict has killed tens of thousands of people.