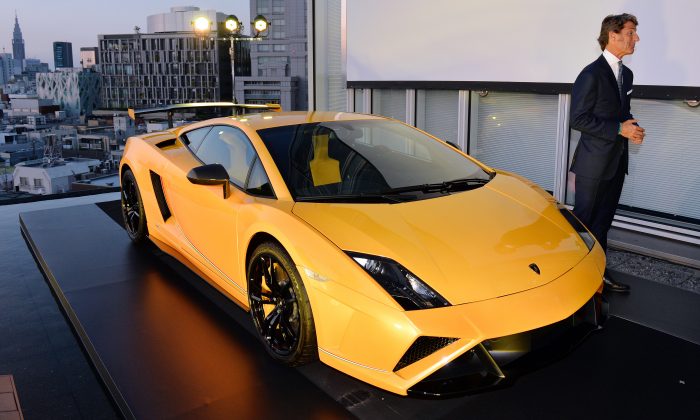 $160,000 Supercar Bursts Into Flames on Highway

A supercar burst into flames with a bang on the side of a busy highway just moments after the driver jumped out and watched helplessly as he filmed the flames engulf his 125,000 pound ($160,000) Lamborghini.

Twenty-two-year-old Lak Sira had picked up the Lamborghini Gallardo convertible from the dealership just hours earlier after a 10,000 pound ($13,000) service, before setting off with his girlfriend down the three-lane highway to London from his home in Birmingham, England, on Feb. 22.

Before long, they noticed the smell of gas, which grew stronger and stronger, until they had to open the windows and pulled over into the emergency stopping lane, known in the UK as a “hard shoulder.”

They got out to take the roof off the car.

“The next thing we heard was a loud bang and the car caught on fire,” Sira said, according to the Birmingham Mail. “If I didn’t get out the car a few moments later it could have been a different story,” he said.

A video posted by Sira on his Instagram account shows the flames start to take hold, shortly after he pulled over. Other footage and photos in the local press show flames engulf the back of the car, reaching several feet above the car.

Sira said that when the flames started, it was “like a firework going off.”

“We nearly died, if I didn’t pull over when I did I dread to think what happened,” he said, according to the Dail Mail.  “It was very frightening and my girlfriend is scared to get in any car with me now.”

Photographs show the back of the car completely blackened and melted.

He watched helplessly as his 'pride and joy' went up in smoke. 😱

Sira is a self-made businessman who left university at the age of 20 to establish his own online trading company after teaching himself the ins and outs of foreign exchange trading. He earns around 200,000 pounds a year.

“I just had to watch helplessly as the car, which I had worked so hard to buy went up in smoke,” he said. “I am meeting with my solicitor to see whether to take legal action as I can’t believe it’s a coincidence that I’d only just had the car back from the garage.”

Sira, already something of a local celebrity, told the Express and Star previously about his success story: “I never saw myself in this position. I always thought I would have a normal job.

“I have been working nonstop for the past year, sometimes not eating or sleeping for a few days, trying to perfect everything. Now I can go on holiday when I like, work in any country, wake up whenever I want to. I can do whatever I want,” he said.

‘Even the Alloy Wheels of a Car Can Burn Incandescently’

There have been several examples of other Lamborghini’s catching fire, with little apparent cause in various countries.

Such fires have been more common the United Arab Emirates, where an abundance of super-rich supercar owners combines with the blistering heat, causing several going up in flames, according to the National.

“Many supercars are often driven very hard and at high revs and the drivers zoom into gas stations with their engine very hot indeed, and in some cases their exhaust outlet manifold can be glowing red with heat,” Robert Hodges, a UK-based technical and road safety expert, told the publication.

“It is always better to plan a stop in a supercar during the summer months, and to deliberately drive for the last couple of miles at a slower, more gentle speed to let the vehicle’s cooling systems get the engine bay a little cooler to prevent damage before stopping,” Hodges said.

“At very high temperatures, even the alloy wheels of a car can burn incandescently like a firework as well as the paint if it comes in contact with vaporising burning fuel,” he said.

Hodges said many supercar fires are also caused by incompetent or careless fuelling, with gasoline coming into contact with hot components.

Case in point being a 400,000-pound Lamborghini Huracan that caught fire in a gas station in Missouri. The driver of a minivan pulled away without removing the fuel nozzle, which sprayed gas over the Lamborghini’s hot engine bay, sparking a fireball that engulfed the car and destroyed it.