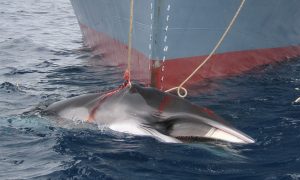 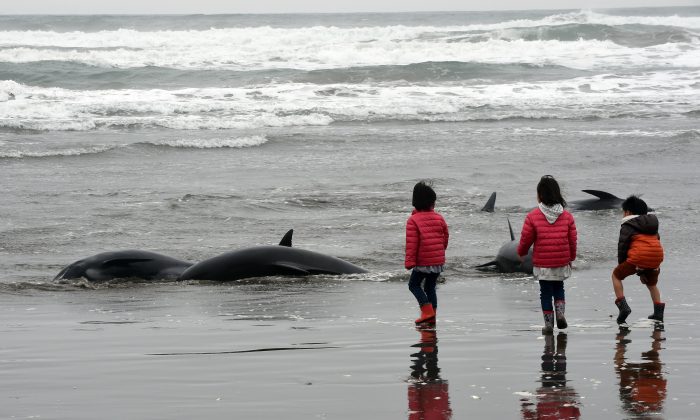 Children look on as residents attempt to save melon-headed whales beached on the shore of Hokota city, northeast of Tokyo on April 10, 2015. (TOSHIFUMI KITAMURA/AFP/Getty Images)
Asia & Pacific

150 Whales Just Beached Themselves in Japan, and Some Think It’s a Sign for Another Huge Earthquake

More than 150 melon-headed whales beached themselves in Japan in the past week, which has ignited fears that another earthquake will hit the island nation.

The same thing happened four years ago when 50 melon-headed whales beached themselves six days before the destructive March 11, 2011 quake and tsunami that caused huge damage and loss of life.

As with four years ago, the whales beached themselves in the same prefecture, Ibaraki, which is only about 60 miles from the epicenter of the 2011 quake.

Across Japanese social media, users expressed worry, including one user who wrote: “Lots of whales beached in Kashima (city nearby Hokotashi). Prepare for earthquake!” according to RocketNews24.com.

“Is the next one coming? Be ready for a quake,” wrote one Twitter user, maoeos40d, according to AFP.

The worries are so pervasive across Japan that scientists in Ibaraki had to issue a statement there’s no concrete, scientific evidence that a mass whale beaching is a sign of a pending earthquake.

It’s worth noting that also in 2011, pilot whales were found beached along the coast in New Zealand two days before the large earthquake that hit Christchurch.

Over the weekend, Japanese scientists were on the beach, looking into what caused the beaching, but they’re not sure of the cause, reported AFP.

“We don’t see any immediate signs of diseases on their bodies, such as cancer. We want to figure out what killed these animals,” Tadasu Yamada, who is a senior researcher at National Museum of Nature and Science, was quoted by public broadcaster NHK as saying.