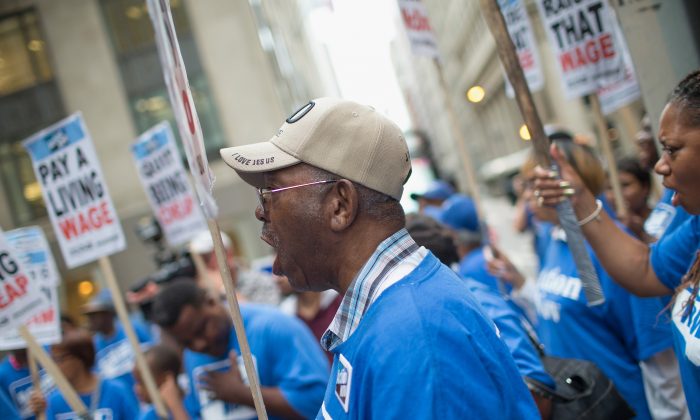 In the past two years, fast-food workers across the nation have gone on strike or had demonstrations calling for wages to be increased to $15 per hour. (Photo by Scott Olson/Getty Images)
Careers

Paying fast-food restaurant employees $15 an hour could lead to an estimated 4.3 percent increase in prices at those businesses, a new study shows.

Researchers also examined the impact of limited-service (fast food) restaurants offering health-care benefits and found that, due to current tax credits in the Affordable Care Act, there would be a minimal effect on prices at limited-service restaurants with fewer than 25 full-time employees.

The study says increasing wages to $22 an hour, which the Bureau of Labor Statistics says is what the average American private industry employee makes, would cause a 25 percent increase in prices.

The current federal minimum wage is $7.25 an hour. Some states and cities across the United States, including Illinois, Michigan, and Ohio, have raised the minimum wage to more than $8 an hour. In the past two years, fast-food workers across the nation have gone on strike or had demonstrations calling for (living) wages to be increased to $15 per hour, the study says.

“We wanted to find out what happens if food-service employees’ wages go up to $15 an hour and what happens if you take it to $22 an hour,” says Richard Ghiselli, professor in and head of the Purdue University School of Hospitality and Tourism Management.

Employee turnover in the foodservice industry led to the study, Ghiselli says.

“Turnover has been one of the more troublesome problems to manage in the foodservice industry. In 2013, franchised establishments experienced a turnover rate of 93 percent,” he says. “People often hypothesize that if you raise pay and offer benefits, turnover will go down. I don’t think we answered the question of whether that reduces turnover, but the study showed that if you raise pay and offer health insurance, prices will go up.”

Ghiselli says the study’s results were close to what he expected and that there could potentially be other effects of raising wages and offering health benefits.

“There were no surprises. We thought prices would go up. We just wanted to know how much they would go up if you raise pay and offer health insurance,” he says. “The other way to look at this if you don’t want to raise the prices is to examine the impact on product size. As expected, a hamburger would be much smaller.”

Data from the National Restaurant Association, taken from across the United States, were used in the study to determine the impact of higher wages on prices. To determine the price impact of offering health-care insurance to limited-service restaurant employees, Ghiselli says researchers obtained information from HealthCare.gov, based on the typical portrait of food-service employees in Indiana.

The study, which doctoral student and graduate teaching assistant Jing Ma coauthors, will appear in the Journal of Foodservice Business Research.