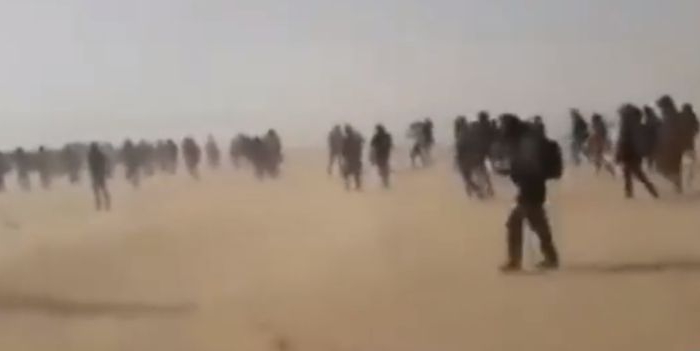 Algeria has expelled or turned away 13,000 migrants and forced them to walk into the Sahara Desert over the past 14 months, The Associated Press reported.

The report said that men, women, and children expelled by Algeria have been sent out into the desert—sometimes at gunpoint.

Human Rights Watch also noted that thousands of migrants have been deported since January 2018. The group said it interviewed more than 30 migrants from sub-Saharan Africa.

Algerian officials, they said, “raided areas where migrants are known to live, arresting them on the streets or on construction sites.”

They expelled them near the “border with Niger or Mali, in most instances with no food and little water,” according to the HRW report.

Those who were forced to flee said that a number of people died along the way.

“Women were lying dead, men. … Other people got missing in the desert because they didn’t know the way,” said Janet Kamara, a migrant who was pregnant at the time, AP reported. “Everybody was just on their own.”

“I lost my son, my child,” said Kamara, a Liberian who ran her own home business in Algeria, told the news agency. She gave birth to a stillborn baby along the way, adding that another pregnant woman in her group also suffered the same fate.

United Nations spokeswoman Ravina Shamdasani told a regular U.N. briefing in May that deportations and expulsions have increased since 2017.

“What they heard was that Algerian authorities frequently carry out mass roundups of sub-Saharan African migrants in various parts of the country,” Shamdasani said, as reported by Qatar-owned Al Jazeera.

Hassen Kacimi, a senior official with Algeria’s Interior Ministry, said that Algeria had called for help from the international community to deal with the migrants, but they added that the U.N. had done little, according to Al Jazeera.

He said that Algeria actually “rescues the migrants abandoned in the desert by offering humanitarian aid.”

“Algeria is not responsible for the population of other states,” Kacimi said. “So whoever wants to cry over the outgoing migrants just (has) to put their hand in their pocket.”

The International Organization for Migration spokesman Joel Millman said that the agency rescued about 3,000 migrants in the Sahel region in the past four months, with some trying to get into Algeria. He claimed that they were dropped 20 miles from the border in 110-degree heat, sometimes without water.

“Migrants were seen losing their lives, often unrecorded or unrecognized in the sand dunes,” Millman said.