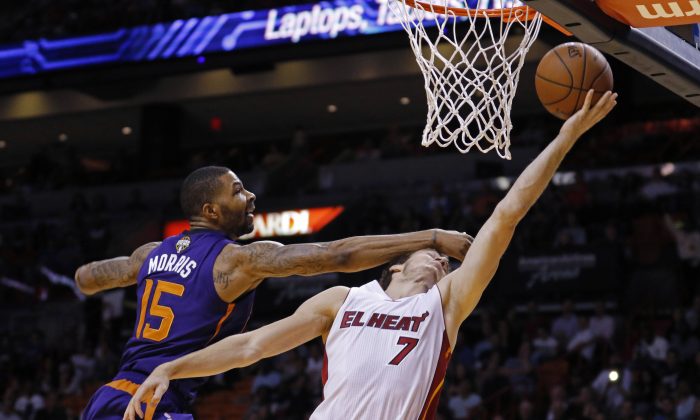 A stunning 13 technical fouls were handed out across just two NBA games on Tuesday night–the Heat-Suns and Timberwolves-Clippers.

The Miami-Phoenix game was fraught with emotion, being the first time Goran Dragic and his former teammates faced off. The Suns, who lead the league in technical fouls, picked up four techs–one each for Markieff Morris, Marcus Morris, Alex Len, and Gerald Green. The Morris twins are first and sixth, respectively, in technical fouls this season.

Markieff, who has 13 technical fouls and 3 flagrant fouls, also received a flagrant-2 for “unnecessary and excessive” contact for a hard foul on Dragic in the open court. “It was a hard foul. It was a basketball play I thought, but the refs thought otherwise,” Markieff said after the game.

That set the stage for a dust up just several minutes later. Hassan Whiteside of the Heat dunked on Len and hit him with an elbow afterwards, whether on accident or purpose. Len then threw him to the ground, and Whiteside quickly got up and dove at Len.

Even though no punches were thrown, both players got ejected. “You’re not going to come into Miami and bully us,” said Whiteside.

Less than a minute later, Henry Walker fouled Marcus Morris pretty hard, earning a flagrant-1. Walker also had a technical in the game, but did not get tossed.

Over in Minneapolis, the Clippers–who have earned infamy for constantly complaining about officiating–and the Timberwolves got into things in a surprisingly heated game.

L.A. saw J.J. Redick get ejected, while Spencer Hawes got a technical foul. Minnesota coach Flip Saunders got a tech, too.

“I was walking to get to my spot on the free throw line and Flip was out on the court. I’m not sure why he was out on the court, but he was yelling and stuff. So I said to the ref, `Man, get him off the court.’ “And Flip turned to me and said, `Man, shut the … up,'” Redick told reporters after the game.

Garnett and Austin Rivers each got a technical when the pair went at it after Rivers bumped into Garnett, and the veteran demanded respect.

The Clippers as a team also got a technical.