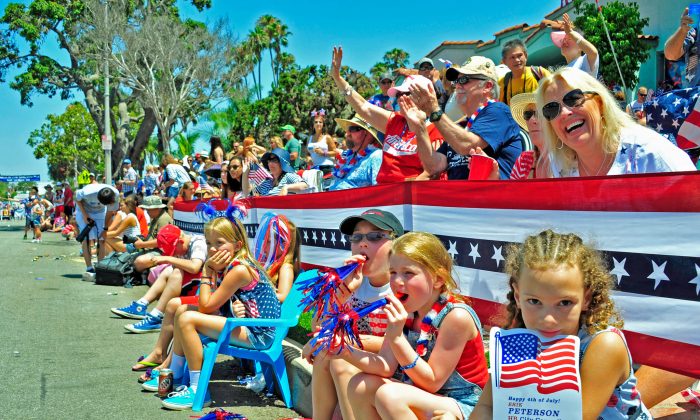 LOS ANGELES—The 110th year of the longest-running July 4th parade west of the Mississippi was held on Friday in Huntington Beach, about an hour south of Los Angeles.

The annual parade has become a popular and lively Orange County tradition.

This year’s theme, “Waves of Freedom,” was especially meaningful to one group, which has been participating in the parade for at least 10 years.

“For me, freedom is my life,” said participant Yuling Zhou in Mandarin. “When I was detained in a labor camp, I even didn’t have the freedom to think. Walking on U.S. soil, being able to celebrate Independence Day in this parade, I feel extremely lucky.”

Zhou marched with the Falun Gong group. Falun Gong is a Chinese meditation practice that looks similar to Tai-Chi. Practitioners strive to live by the principles of truth, compassion, and tolerance.

But in China, Zhou was tortured for her practice. The Chinese Communist Party has been arresting, torturing, and killing people like Zhou for their beliefs for 15 years.

“In the labor camp, I was shocked by electric batons. I also suffered sleep deprivation. Every day I was forced to stand facing a white wall. I had to stand very straight, with my nose pushed against the wall.”

Zhou used to do research at China’s prestigious National Library, but she was laid off in 1999. She was sent to a labor camp twice before coming to the United States.

Through the simple act of walking down a Huntington Beach street in a parade, Zhou was able to experience a small part of what freedom means in America.

The colorful floats created by the Falun Gong group have won awards from parade officials almost every year they were entered.

“They come every year, and they’re very enthusiastic,” said Bob Salcido, who watched the parade from his chair on the edge of the street. “Their colors are so bright. I love seeing them.”

The mayor and his wife, servicemen, student marching bands, and many other groups as diverse as the Victory Taekwondo Academy and the Marina High School Robotics Team also joined the parade.

Denise and Dennis Bennett have been coming to the parade together every year since they got married four years ago. Just the thought of the meaning of the Fourth of July holiday brought tears to Dennis’ eyes.

“There are men and women that aren’t with us today that allowed this day to happen. We honor them for this,” said Dennis Bennett.

The city of Huntington Beach also hosts an evening fireworks show every 4th of July, right on the beach.