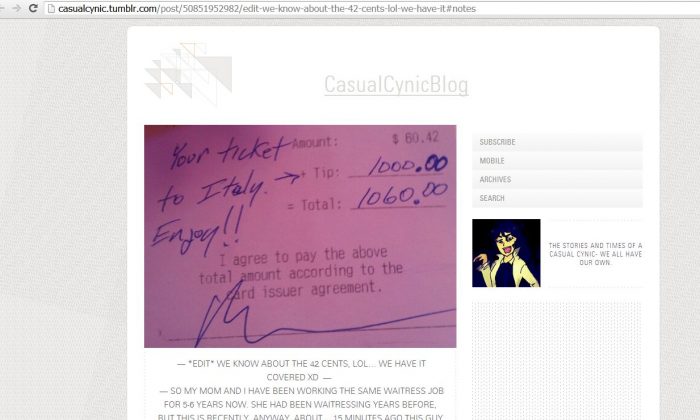 A screenshot of the "Casual Cynic" Tumblr page shows the receipt.
News

The woman, who goes by the name “Casual Cynic” on Tumblr, published a photo of the slip recently. The customer wrote: “Your ticket to Italy. Enjoy!!”

The post generated more than 1,000 notes on the social media site.

The customer left the tip after she she talked about visiting Italy, according to Yahoo News.

“SO MY MOM AND I HAVE BEEN WORKING THE SAME WAITRESS JOB FOR 5-6 YEARS NOW. SHE HAD BEEN WAITRESSING YEARS BEFORE, BUT THIS IS RECENTLY. ANYWAY, ABOUT… 15 MINUTES AGO THIS GUY SHE WAITED ON LEFT AND TOLD HER TO TAKE CARE,” the “Casual Cynic” Tumblr post reads.

Last week, it was reported that a woman left a $442 tip on a $6 bill for a waitress in Indiana.

“She asked me if she could leave me a ridiculously large tip, but I did not know that it was that large,” said Steak n’ Shake waitress CeCe Bruce.