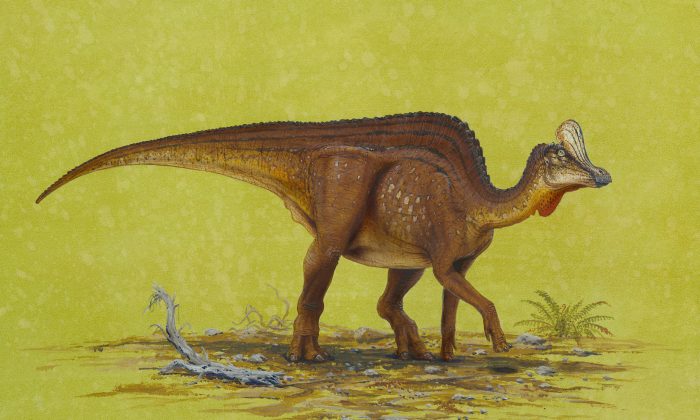 A dinosaur fossil found in Alberta, Canada has been identified as belonging to a hadrosaur, a group of dinosaurs that lived in the Late Cretaceous period, between 70 million and 65 million years ago. This rendering is of a Velafrons coahuilensis, which is part of the hadrosaur grouping. (Utah Museum of Natural History at the University of Utah)
Canada

A dinosaur fossil was found on Oct. 1 near the town of Spirit River in northern Alberta in Canada.

The fossil is estimated to be 30 meters, or almost 100 feet, long, reported CBC.

An expert told the news agency that the find is “phenomenal.”

Brian Brake, executive director of the Philip J. Currie Dinosaur Museum, told the Edmonton Journal that what was found was the remains of a hadrosaur.

These “duckbilled dinosaurs” likely had padded feet, similar to camels, and spent most of their time on land but close to water, according to the University of California, Berkeley.

A rendering of a hadrosaur. (Bureau of Land Management)

This fossilized skeleton was found by a pipeline inspection crew about five feet deep in the Saddle Hills areas, southwest of the Spirit River.

A backhoe operator moved some earth and broke off a piece of the fossil. He laid the piece aside, and was about to get back to work, but saw the exposed fossil in front of him.

Brake said that the fossil is one of the most complete finds in this part of the world in a long time.

“What we have is a totally composed tail,” Brake said. “It’s beautiful.”

Dr. Matthew Vavrek, head palaeontologist for the Pipestone Creek Dinosaur Initiative, said: “We haven’t seen anything this pure before.”

The site is shut down and palaeontologists from the Royal Tyrell Museum and National Geographic arrived on the scene. They plan on carefully removing the fossil, taking it either to the museum or the University of Alberta.