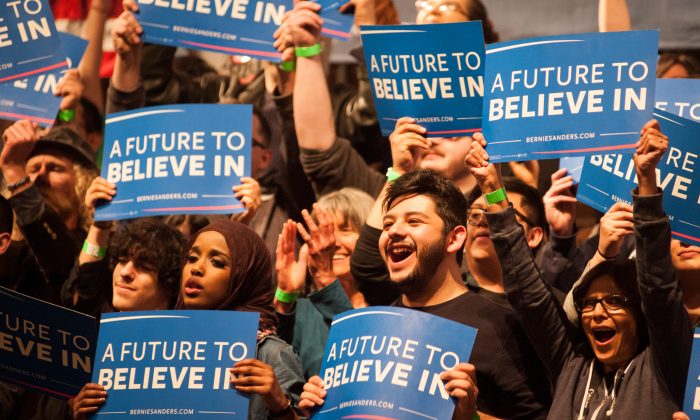 Supporters cheer as Democratic presidential candidate Sen. Bernie Sanders (D-VT) speaks during a political rally on April 5, 2016 in Laramie, Wyoming. Sanders spoke to a large crowd on the University of Wyoming campus after winning the Wisconsin primary. (Photo by Theo Stroomer/Getty Images)
2016 race

One in Four Sanders Supporters Won’t Vote for Clinton in the General Election, Poll Shows

Sanders ahead by 2 points nationally
By Steven Klett
Print

Twenty-five percent of Bernie Sanders supporters would not support Hillary Clinton in a general election, reports the latest McClatchy-Marist poll, while 69 percent say that they would.

Conversely, only 14 percent of Clinton’s supporters would not support Sanders in the fall, while 79 percent would.

Sanders campaign has a slight lead in overall numbers, showing him up by a 2-point margin—49 percent to 47 percent.

Hot on the heels of a Wisconsin victory, the Sanders campaign has a slight lead in overall numbers, showing him up by a 2-point margin—49 percent to 47 percent.

The poll has a margin of error of plus or minus 4.4 percentage points

Conducted from March 26–29 and using a sample size of 1,066 registered voters, the poll showed that Sanders has a lead among people who were younger than 30, Latinos, political independents, unmarried, and those identifying as liberals.

Clinton leads with a large margin among those 60 and older, among African Americans, married people, and those identifying as Democrats.

It’s the weirdest thing in the world.
— Bernie Sanders

Sanders confessed in an interview with Spike Lee that the age gap confuses him:

“We’re getting killed, frankly, not just with older African-Americans but also older whites, older Latinos. It’s the weirdest thing in the world,” Sanders said. “So we have a lot of work to do in terms of reaching out to seniors, not just African-Americans, but seniors all across the board. We’re figuring out how you get the message out there.”

Sanders and Clinton are headed to New York for a heavily anticipated primary matchup on April 19.