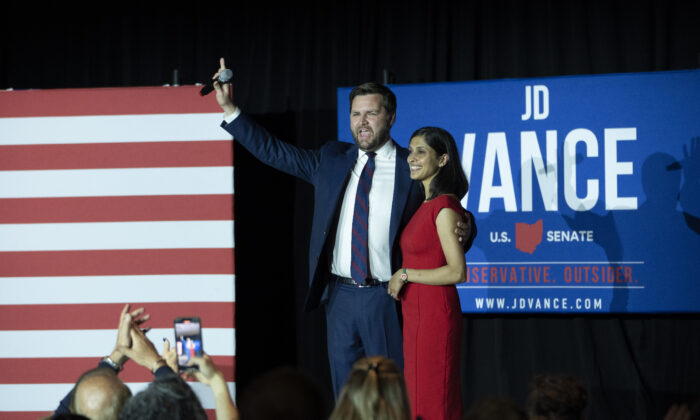 J.D. Vance, a Republican candidate for U.S. Senate in Ohio, and his wife Usha Vance wave to supporters after winning the Ohio Republican Senate primary election at an election night event at Duke Energy Convention Center in Cincinnati, Ohio, on May 3, 2022. (Drew Angerer/Getty Images)
2022 Midterm Elections

Vance and Ryan Agree, Disagree on Ohio US Senate Debates

In the race to replace retiring Ohio Republican Sen. Rob Portman, Republican J.D. Vance and Democratic Rep. Tim Ryan announced that they have agreed to upcoming debates, but there are conflicting details about when and where the events will take place.

Ryan released a statement last week saying that he will participate in debates on Sept. 26 hosted by WFMJ-TV in Youngstown at Stambaugh Auditorium, on Oct. 4 coordinated by Cincinnati-based WLWT-TV at Parrish Auditorium on Miami University’s Hamilton Campus, and on Oct. 12 at the Akron-Summit County Public Library.

Vance said in a statement last week that he will take the stage in a debate hosted by WJW-TV in Cleveland on Oct. 4 and a debate coordinated in Hamilton at a date to be determined, which apparently is the WLWT-TV event.

The Ohio Debate Commission is hosting the Oct. 12 forum at the Akron-Summit County Public Library.

Vance did not commit to that event.

“In an election cycle where voters have indicated how concerned they are about threats to democracy,” Ohio Debate Commission executive director Jill Zimon said. “Candidates’ participation in high-quality debates—and providing that content to as many Ohioans as possible—is more critical than ever. Our record shows our capacity to reach millions of Ohio voters with this important content.”

Vance is an attorney, venture capitalist, and “Hillbilly Elegy” author who is endorsed by former president Donald Trump.

Ryan is in the midst of his 10th term as an Ohio U.S. representative in the Youngstown area.

“This election will steer the direction of Ohio for years, but because J.D. Vance has spent the last few months hiding from Ohio voters and campaigning basically everywhere except Ohio, voters haven’t had a chance to hear directly from him,” Dave Chase, Ryan’s campaign manager, said in a statement.

Vance’s campaign continued to remind Ohioans that Ryan is running on a populist platform that is not supported by his actions in congress.

“Tim Ryan has built his candidacy on the lie that he’s a moderate Democrat,” said Jordan Wiggins, Vance’s campaign manager. “Tim Ryan’s 20 years in D.C. tell a different story: he votes with Joe Biden 100 percent of the time, voted for taxpayer-funded abortion on demand until the point of birth, voted to raise taxes over a hundred times, and voted with the defund the police movement.”

Ryan’s congressional records do show he has voted with Biden 100 percent of the time, but he has skipped the president’s previous visits to Ohio this year. He said he will attend Intel Corporation’s Sept. 9 groundbreaking in Licking County east of Columbus on its $20 billion semiconductor fabrication facility, which is the state’s largest-ever economic development project.

At the groundbreaking, Biden is expected to talk about the CHIPS and Science Act, which he signed in August.

Ryan voted for the CHIPS Act, a bill he helped author. Vance said he would have voted for the measure if he was in office. It is one of the few issues the opposing candidates agree upon.

Last week, in a national address, Biden painted Trump supporters as “extremists” and called the MAGA movement “semi-fascism.” He reiterated his disdain for Trump supporters during Labor Day speeches in Milwaukee and Pittsburgh.

Focused on getting crossover voters and appealing to Republicans and independents, Ryan has distanced himself from Biden. When Biden announced his executive order to forgive student loans, Ryan spoke out against the action.

Biden’s plan forgives $10,000 in federal student loan debt for borrowers with annual incomes below $125,000, or homes that earn less than $250,000. It also cancels an additional $10,000 for people who received federal Pell Grants to attend college.

“As someone who’s paying off my own family’s student loans, I know the costs of higher education are too high,” Ryan said in a statement. “And while there’s no doubt that a college education should be about opening opportunities, waiving debt for those already on a trajectory to financial security sends the wrong message to the millions of Ohioans without a degree working just as hard to make ends meet.”

Ryan added that the government should pursue an across-the-board tax cut for working- and middle-class families, and medical debt cancellation among other measures instead of forgiving loans “for six-figure earners.”

Ryan’s recent comments represent a reversal of what he said in 2018 when he praised the idea of reducing college debt.

Ryan encouraged Congress to “do more to help bring this debt down and make college more affordable” earlier in 2018, adding that “44 million Americans owe a total of $1.5 trillion in student debt. This prevents them from investing in their communities, our economy, and their futures.”

In May 2020, Ryan voted yes on the HEROES Act, which featured plans to eliminate as much as $10,000 in student loan debt for around 20 million borrowers.

A few months later, he backed an amendment to the National Defense Authorization Act that required the federal government to give $10,000 in immediate assistance to approximately 4.5 million private student loan holders.

“He (Ryan) voted for it, but now he says he’s against it because he’s running for Senate,” Vance told reporters. “It’s a pretty substantial giveaway to a group of Americans that, by and large, doesn’t need it right now.

As of Aug. 30, the Cook Political Report and Sabato’s Crystal Ball call the race “Lean Republican” while Inside Elections rates it as “Likely Republican.”

When factoring in all polling data through Aug. 19, the RealClearPolitics average has Vance holding a 3.7-point lead over Ryan.