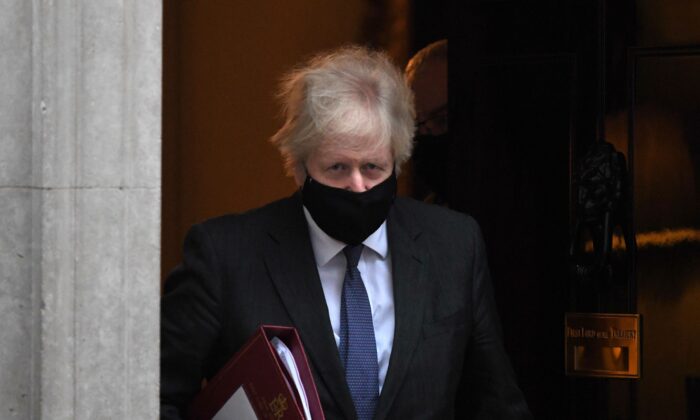 British Prime Minister Boris Johnson on Wednesday deflected criticisms of his government’s stance on the plight of China’s Uyghur Muslim minority and said the attribution of genocide is “a judicial matter.”

On Tuesday, Johnson’s government instructed lawmakers from the ruling Conservative Party to vote down an amendment to the Trade Bill that would have given UK courts power to revoke trade deals with countries responsible for genocides.

The amendment was defeated by a margin of just 11 votes, with 319 Conservative MPs voting in line with the government to reject it, and 308 MPs—including 33 Conservative rebels—voting to support it.

“Genocide isn’t a matter of history, it is happening in our world right now. The international community has stood idly by as Uyghur Muslim men, women, and children are forced into concentration camps in China’s Xinjiang province,” he said in the House of Commons via video link.

Noting that the outgoing U.S. Secretary of State Michael Pompeo had officially declared Beijing’s repression of Uyghurs a “genocide” and Biden’s team “agrees with his view,” Blackford asked, “Is the prime minister prepared to follow that lead? Is he prepared to stand up today and clearly state that genocide has been committed against the Uyghur population in China?”

Johnson responded by saying, “The attribution of genocide is a judicial matter, but I can say for myself that I regard what is happening in Xinjiang and what’s happening to the Uyghurs as utterly abhorrent.”

He said the government had taken steps “against what is happening,” including measures to “prevent British commercial engagement with goods that are made by forced labour in Xinjiang.”

Foreign Secretary Dominic Raab announced last week that the UK would take a series of measures to ensure UK businesses and public bodies do not allow goods produced with slave labour in Xinjiang in their supply chains.

But lawmakers from both the ruling and opposition parties said the measures were inadequate and that targeted Magnitsky sanctions should have been imposed on Chinese officials responsible for the abuse in Xinjiang.

In July 2000, the UK government introduced new sanctions to target individuals involved in human rights abuses or organised crime. But so far it has not used the new policy tool to target Chinese officials.

On Tuesday, the Trump administration declared that the Chinese regime has committed “genocide” and “crimes against humanity” against Uyghur Muslims.