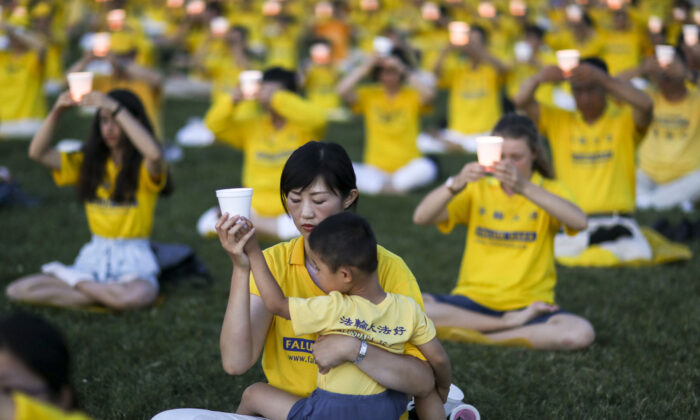 Falun Gong practitioners take part in a candlelight vigil commemorating the 20th anniversary of the start of the persecution of Falun Gong in China, on the West Lawn of Capitol Hill on July 18, 2019. (Samira Bouaou/The Epoch Times)
China Human Rights

Persecuting Uyghur Muslims in China’s far-western region of Xinjiang is but one of a slew of human rights abuses by four Chinese officials who were recently sanctioned by the U.S. administration.

The sanctions, imposed under the Global Magnitsky Act on July 9, barred four Chinese officials, as well as their immediate family members, from entering the United States. The sanctions will also block U.S. properties that are under the individuals’ names and prohibit U.S. transactions with them, the U.S. Treasury Department said.

In Xinjiang, home to roughly 11 million Uyghurs, at least 1 million Uyghurs and other ethnic Muslim minorities have been detained within internment camps and subjected to torture and political indoctrination in an effort to coerce them into giving up their faith.

But such persecution is not confined to Xinjiang: Human rights reports and Chinese government records have revealed a string of human rights abuses carried out under the officials’ watch, targeting human rights defenders and faith groups, including adherents of Falun Gong.

Also known as Falun Dafa, the mind and body meditation based on moral principles of truthfulness, compassion, and forbearance has faced brutal persecution since 1999. Millions have likely been detained over the past two decades, with hundreds of thousands tortured, according to estimates by the Falun Dafa Information Center.

Minghui.org, a U.S.-based website that serves as a clearinghouse for information about the persecution in China, has confirmed the deaths of at least 4,500 adherents, though it is difficult to transmit sensitive information out of China. The true numbers are likely to be much higher.

Human rights experts say that the Chinese regime’s experience with suppressing Falun Gong became a template for authorities in Xinjiang to suppress Uyghur and other Muslim minorities.

Chen Quanguo, Xinjiang’s Chinese Communist Party boss and the highest-ranking Chinese official to be hit with U.S. sanctions, began persecuting Falun Gong practitioners as a senior official in his hometown in Henan Province.

From 2000 to 2005, he rose through the ranks by participating in the persecution, eventually becoming vice Party secretary of Henan’s standing committee. Chen had oversight over the destruction of Falun Gong flyers, books, and CDs, as well as ousting government officials who practiced Falun Gong, The Wall Street Journal reported in 2019, citing provincial records. The government reports appear to have been deleted since.

After Chen became Party boss of Xinjiang in 2016, the period marked “the most severe persecution” for Falun Gong practitioners in the region, who risked getting arrested while taking public transport, reporting to work, or visiting government offices for personal affairs, according to Minghui.org.

Before and after the Party’s key conclave, the 19th National Congress, in 2017, Xinjiang police questioned all local Falun Gong adherents, detaining those who refused to give up their beliefs or put down their names on a wanted list. Some were also placed under house arrest, according to a 2018 Minghui report. Practitioners from other areas who were passing through Xinjiang security checkpoints were also arrested, it noted.

In 2017, the region ramped up its security spending by more than 27.5 billion yuan ($3.93 billion)—nearly double the figure of the year prior, government budgets show. While the Xinjiang government didn’t specify where the funding went, the region has since seen a surge in surveillance camera policing, phone monitoring, and DNA data collection.

Over the past three years, Falun Gong practitioners in Xinjiang also faced arrests for reasons including having “incorrect thoughts,” refusing to open the door for the police, or using other mobile apps than WeChat, the ubiquitous, government-supported Chinese messaging app—which researchers say has been gathering data from users both in mainland China and abroad to refine its censorship mechanisms.

Among the arrestees was 90-year-old Yan Yixue, who has been held incommunicado since shortly before the Party convened its annual Two Sessions in late May. In 2018, she was detained for a year in a brainwashing center, where police beat her for practicing Falun Gong exercises while incarcerated. She was cuffed onto an iron stool, unable to move, for nearly half a month. She staged a hunger strike in protest, according to Minghui.org.

Police and neighborhood committee officials in Xinjiang also frequently break into local Falun Gong practitioners’ homes and photograph them to update the government’s facial recognition database, according to Minghui.org.

Sarah Cook, a China analyst at the human rights group Freedom House, has previously written essays analyzing the similar patterns in persecution of Falun Gong practitioners versus Muslim minorities in Xinjiang, stating that authorities are following an “anti-Falun Gong playbook in Xinjiang.”

“It’s like any kind of project management. Once you’ve done it before, it goes that much faster the second time,” Cook told The Epoch Times in a previous interview. “They know exactly what they’re doing.”

The organization linked at least one death to Wang: 77-year-old Sheng Kezhi, a Falun Gong practitioner in the Xinjiang capital of Urumqi. His wife and daughter, also Falun Gong adherents, suffered years of extrajudicial detention. After his wife was again detained in 2012, Sheng died from the stress.

“What the Chinese Communist Party is doing to their own people is sickening,” Sen. Ben Sasse (R-Neb.) said in a press release following news of the sanctions, adding, “We need to do more to highlight the CCP’s atrocities until they are held fully to account for their abuses.”