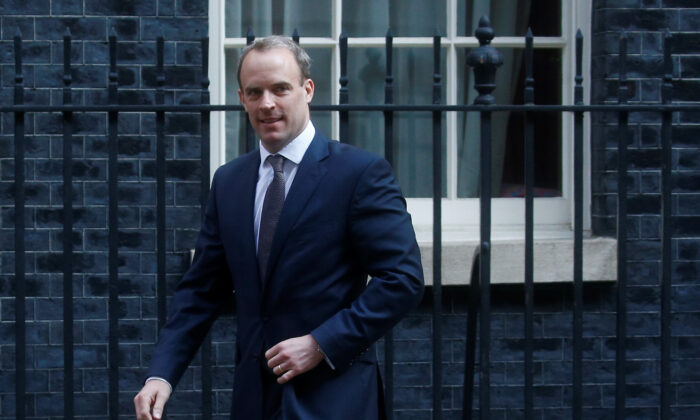 Britain on Tuesday introduced measures to prevent British organisations from being complicit in the Chinese regime’s human rights violations against Uyghurs.

“The evidence of the scale and severity of the human rights violations being perpetrated in Xinjiang against the Uyghur Muslims is now far reaching,” UK Foreign Secretary Dominic Raab said in a statement.

“Today we are announcing a range of new measures to send a clear message that these violations of human rights are unacceptable, and to safeguard UK businesses and public bodies from any involvement or linkage with them.”

The UK government will conduct a review of export controls to prevent goods that may contribute to human rights abuses from being exported to the Xinjiang region.

Home Secretary Priti Patel said that businesses and public bodies “must be more vigilant than ever before and ensure they are not inadvertently allowing forced labour in their supply chains.”

As part of the new measures, all UK public bodies will be given guidance on excluding suppliers that may have been complicit in human rights violations in Xinjiang.

The government will also provide detailed guidance to UK businesses, informing them of the risks associated with maintaining commercial links to Xinjiang.

In addition, financial penalties will be introduced for businesses that fail to meet their obligations to publish annual modern slavery statements, under the Modern Slavery Act.

“This government wants to work with businesses to support responsible practices, and ensure British consumers are not unwittingly buying products that support the cruelty we are witnessing against the Uyghurs and other minorities in Xinjiang.”

But the main opposition Labour Party said the foreign secretary’s words “are not matched by the strength of his actions.”

The Foreign Secretary says the persecution of the Uighur is harrowing, barbaric and truly horrific. His actions do not match his words. pic.twitter.com/ikAovJClNF

Iain Duncan Smith, a former leader of the Conservative Party, welcomed Raab’s announcement, but said Magnitsky sanctions should have been included in the measures.

The United States has already imposed sanctions on four Chinese officials involved in human rights abuses against Uyghurs, including the Xinjiang region’s Party Secretary Chen Quanguo, who is a member of the Chinese Communist Party’s powerful Politburo.

In July 2000, the UK government introduced new sanctions to target individuals involved in human rights abuses or organised crime. But it has not used the new policy tool to target Chinese officials despite calls for it to do so from lawmakers from both the ruling and opposition parties.