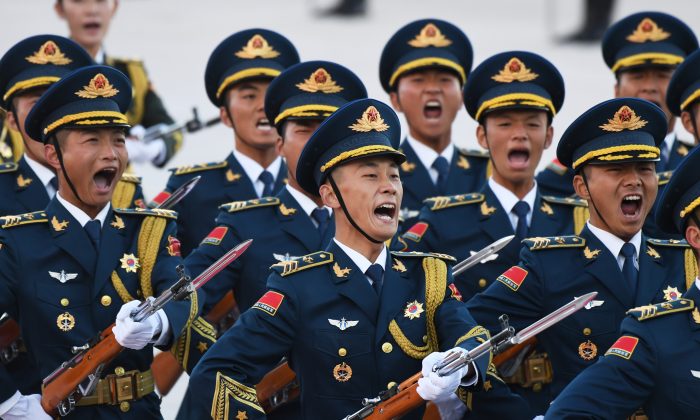 In the United States and Australia, two cases of Chinese nationals secretly obtaining confidential information was recently exposed. One took photos of a U.S. military base and the other downloaded trade secrets in Sydney. The two perpetrators attended the same university in China: the North University of China, a school with a strong military background.

Zhao Qianli, a 20-year-old Chinese national who was in the United States as an exchange student, pleaded guilty in court for taking photos of the U.S. Naval Air Station Key West in Florida. He was sentenced to one year in prison.

In September last year, Zhao was arrested after taking photos at the Key West Naval Air Station. Investigators found on his digital camera and smartphone that he had taken photos and videos of government buildings and an antenna field.

Zhao defended himself by saying that he was just a tourist who got lost.  But according to court documents, none of the photos and videos found on his cell phone and digital cameras were of any tourist attraction sites in Key West.

Witnesses also said they saw Zhao walk directly toward the restricted area where the antenna field was located and took photos—despite a sign clearly indicating the area was restricted.

Zhao had studied in a summer exchange program that ended in September. His visa had already expired when he was arrested.

According to a Feb. 11 Free Beacon article, citing law enforcement sources, investigators discovered that Zhao was in touch with Chinese intelligence officers inside the United States before he took photographs at the base.

Under FBI interrogation, Zhao also disclosed he was the son of a high-ranking Chinese military officer and that his mother worked for the Chinese government.

Coincidently,  a Chinese citizen charged with stealing confidential data in Australia is also a graduate of North University of China.

Zheng Yi, 28, a contractor who provided customer support for Australia’s largest financial firm AMP, was charged with stealing confidential data related to 20 AMP customers. Australian police arrested him in January at the Sydney International Airport when he was about to fly back to China with his wife and child, according to reports by Australian media ABC.

Zheng pleaded guilty at a Sydney court on Feb. 7, and will be sentenced on March 21.

The Mysterious North University of China

Both Chinese suspects were students of North University of China.

According to the university’s official website, the school was founded by the Eighth Route Army, a division under the command of the Chinese Communist Party (CCP) during the Second Sino-Japanese War.

Peng Dehuai, then-deputy commander-in-chief of the Eighth Route Army and general of the Chinese forces during the Korean War, and Zuo Quan, then-deputy chief of general staff, were personally involved in providing instructions for the preparation of the school, according to a report by state-run news website ChinaNews.com.

As of October 2016, more than 2,000 graduates of North University have been dispatched to army, navy, air force, rocket army, and strategic resources of the army, according to a Dec. 2017 report by the Chinese military’s official news website, 81.cn.

The Structure of China’s Intelligence Agencies

Yao Cheng, a former lieutenant of the Chinese navy who currently lives in the United States, told Radio Free Asia in a Feb. 13 interview, after the People’s Liberation Army—the official name of the Chinese military—simplified its organizations in 1992, many military colleges and universities are now disguised as a local university or have become part of a local university. But in actuality, those schools specialize in training spies. “I believe they are providing more and more rigorous espionage training over the years, with a focus on how to perform military technology theft,” he said.

Yao himself had received spy training at a secretive college in Chongqing many years ago.

“Most interestingly, the National Education Commission is one of the six major intelligence agencies. Especially those government-sponsored students studying abroad, they all have special [spy] missions.”

Yao also exposed the Chinese intelligence agencies often use the “flying swallow” plan, whereby overseas Chinese students who serve as spies work with a single contact in China—just as swallows pick up only one piece of mud at a time to build their nests. The students do not have their personal files inside China’s intelligence system, so if they are caught, there is little information to be revealed.

The Australian Strategic Policy Institute released a report in October last year detailing the PLA’s long-standing practice of sending military scientists overseas to acquire military technology in the West. According to this report, the Chinese military has sponsored more than 2,500 scientists and engineers to study abroad since 2007. Approximately 500 were sent to the U.K. and the United States, and roughly 300 each to Australia and Canada. In at least 17 cases, PLA scientists were found to have hidden their military affiliations while studying abroad, the report stated.